New SEAT Leon Cupra R 2018 review – is it really worth the money?

The Cupra R offers tangible benefits over the old car, particularly the handling, so it’s a shame so few drivers will feel the benefits 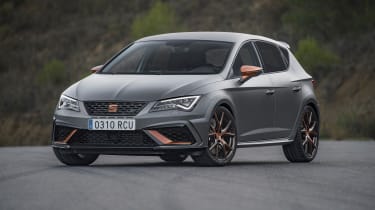 It’s fair to say the SEAT Leon Cupra has lost its way a little. Cars such as the Honda Civic Type R, Hyundai i30 N and Peugeot 308 GTi have all muscled in on the SEAT’s territory. In fact, the firm’s high performance Cupra sub brand as a whole is somewhat out of sorts. Not so long ago it delivered a line-up of hot hatches that made up in spirit and value for what they lacked in ultimate sophistication. Yet the desire of SEAT management to push the Spanish brand upmarket means Cupra models have been left feeling unloved. Until now, that is.

In an effort to inject some much-needed excitement, SEAT has pulled the covers of the Leon Cupra R. Based on the standard Cupra 300, it features a power boost, revised suspension and a number of cosmetic and aerodynamic upgrades. Just 799 of these cars will be built, with a scant 24 right-hand drive examples finding their way to the UK, all of which have already found homes.

In the unlikely event you see one of these rarities on the road, you should have no trouble picking it out from the standard version. The most obvious additions are the wider wheelarches front and rear, plus the deeper front bumper and extended side skirts. At the rear is a prominent tailgate spoiler and a more aggressive looking diffuser, plus a pair of round tailpipes in place of the standard car’s oval items. These visual changes aren’t just for show, as they actually improve aerodynamics by reducing lift at speed. As a final visual flourish there are a number of carbon inserts and copper coloured trim pieces.

Inside, the copper theme continues, with the colour appearing on the seats, dash and door trims. The steering wheel and gearlever get an Alcantara finish, while every car gets a numbered plaque underlining its rarity.

The major mechanical changes have been reserved for the suspension, which has been tweaked to deliver a sharper driving experience. For starters the electrically powered rack has been recalibrated for a faster response, while the strut front suspension has been adjusted to deliver greater negative camber in an attempt to improve turn-in and front-end grip – it has been increased from 1.3 degrees to two degrees. The ride height remains the same, but the calibration of the standard adaptive dampers has been altered to work over a wider bandwidth. There are also 19-inch alloys that feature a wider rim, increasing the track of the car by 20mm front and rear.

Other changes include the adoption of 370mm front brake discs that are clamped by Brembo four pot calipers – a system that’s similar to that used on the old Sub8 performance pack models. Finally, you can add Michelin Pilot Sport Cup 2 tyres for £855.

In all other respects the R is effectively a standard Cupra, albeit a well equipped one. All the showroom tinsel is present and correct, including LED headlamps, wireless smartphone charging, sat-nav and keyless entry.

Underneath the eye-catching bodywork is a lightly fettled version of the Cupra 300. The biggest change is to the tried and tested EA888 turbocharged 2-litre engine, which receives a relatively modest 10bhp power boost to 306bhp – an identical output to the VW Golf R. However, the maximum torque figure remains unchanged over the standard Cupra, with 280lb ft available at a fairly useful 1800rpm. Finally, a revised exhaust system has been added in an effort to give the Leon a more purposeful soundtrack.

Unlike the four-wheel drive Golf R, all this power goes through the front wheels only, although an electronically controlled front differential helps to maximize traction. All 24 UK cars will come with a six-speed manual gearbox – the optional twin-clutch set-up will only be available on left-hand drive models. 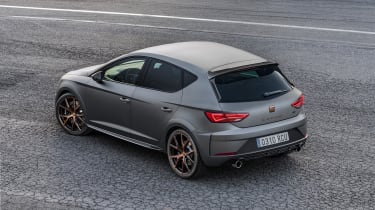 As you’d expect, performance is brisk, with SEAT claiming the 0-62mph sprint in just 5.8sec, which is, erm, exactly the same time as a normal 300 Cupra with a manual gearbox. In reality, the R feels no faster than its cheaper, series production cousin, with only a slightly fiercer delivery over the last few hundred rpm before the redline. That said, the combination of a lightweight construction and the 2-litre turbo’s generous spread of torque has always meant the Cupra is one of the faster hot hatches, and in a straightline it feels no slower than a Civic Type R.

What has changed is the way the SEAT sounds when you’re working it hard. The revised exhaust system means there’s a deeper burble at idle and a more purposeful rasp when you extend the engine. There are also one or two pops and crackles on the overrun.

The six-speed manual is as before, which means the shift benefits from a relatively short-throw and precise action, but occasional notchiness when you’re not trying to make lightning fast changes. 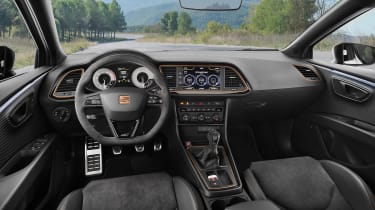 If you’ve driven the old Leon Cupra Sub8 then you’ll feel at home in the R. In essence, it’s the car the current Cupra should have been when you consider it’s up against rivals such as the Honda Civic Type R. It’s an altogether more poised and engaging proposition than the standard model, which feels a bit scrappy and over-engined when worked hard.

Now, it’s worth bearing in mind that our test cars were fitted with the optional Michelin Pilot Cup Sport 2 tyres, which always improve grip and feel more approachable at the limits of adhesion. Even so, the revised steering feels sharper and benefits from a natural weighting even in its standard mode, helpng the Leon dive more eagerly for the apex. On the dry and smooth Spanish tarmac of our test route the SEAT’s nose clung on gamely during turn in, helping to boost confidence. Its trick differential delivered impressive traction on the exit of the bend – although on the few bumpy surfaces we encountered there was some subtle weave from the front wheels as they struggled to deploy the turbocharged motor’s deep reserves of torque.

The revised dampers deliver a firmer low speed ride, but the upshot is improved body control when the chassis is loaded up. Where the standard car can get a bit discombobulated, the R feels tied down and precise. 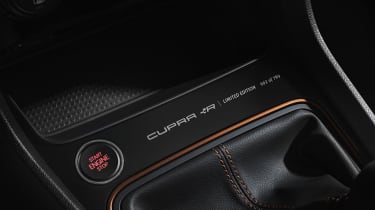 As with the ordinary Cupra there’s a choice between Eco, Normal, Sport and Cupra settings. You can also mix and match your favourite steering, throttle, suspension and diff maps using the Individual programme. The sportiest setting serves-up an eager throttle response, but the steering feels artificially heavy and the stiffened dampers will arguably lack the compliance to cope with Britain’s typically torn and rutted roads. As a result, it’s best to experiment with the individual modes – we settled on Cupra throttle and diff modes, with Normal for everything else.

The only real cause for complaint are the Brembo brakes, which are powerful and resist fade but, like many SEAT products, feel over servoed at the top of the pedal’s travel, meaning a delicate touch is needed for smooth progress.

At £34,995 the SEAT Leon Cupra R is £2000 more than the Honda Civic Type R in GT guise and £2000 more than the Ford Focus RS – both of which are more powerful. For some buyers the car’s rarity will make the price premium worth it, but there’s no escaping from the fact that while the R is much improved over the standard car, it can’t quite match the Honda when it comes to performance, poise and driver engagement. 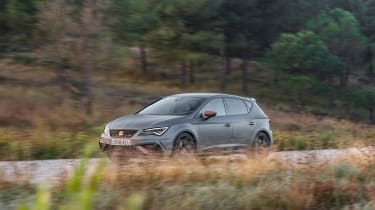 Make no mistake, the SEAT Leon Cupra R is a fast and fun hot hatch that represents a worthwhile improvement over the standard car, but it simply doesn’t do enough to justify its high asking price – limited run edition or not.

In many respects, the Cupra R is the car the standard model should be – apply these changes to the series production version while minimizing any price increase and the Leon would once again be a serious contender. However, due to the hand-finished nature of the body parts, it’s unlikely that this will happen, so in the meantime we’ll have to hope that this more focused approach to Cupra models will filter down to future hot SEATs. 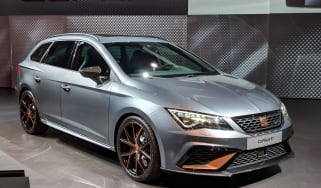 Sad you missed out on the Cupra R hatch? SEAT are building more, only with extra boot space
Visit/seat/leon-cupra-r/19933/seat-leon-cupra-r-sold-out-in-uk 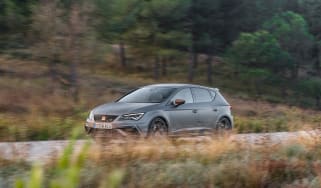 Despite the steep asking price, all of SEAT’s hardcore Leon Cupra Rs are now spoken for
Visit/seat/leon-cupra-r/10845/renault-megane-250-cup-v-focus-rs-v-seat-leon-cupra-r-v-golf-gti 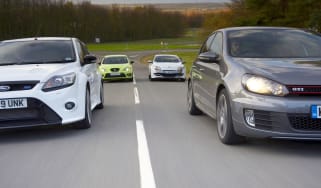 Megane 250 Cup, Focus RS, SEAT Cupra R and the Golf GTI take to the Bedford Autodrome to see who is the fastest
Skip to HeaderSkip to Content