SEAT has launched a new Sub8 package for the Leon Cupra 280, offering the same spec as the car that lapped the Nurburgring in under eight minutes 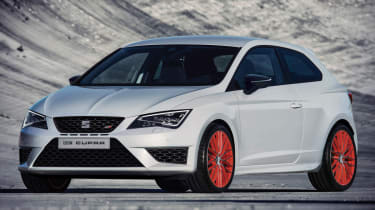 SEAT has announced pricing and details of its 'Sub8 Performance Pack' for the Leon Cupra, allowing buyers to replicate the specification of the car that became the first hot hatchback to achieve a Nürburgring Nordschleife lap time of under eight minutes. That record might only have lasted a couple of weeks thanks to rival Renault, but SEAT is pushing the value aspect of its pack, which adds £2025 to the cost of the £27,210 Leon Cupra 280. For that, the Spanish firm will upgrade the Cupra's brakes, the new 370mm discs a full 30mm larger in diameter than before. A set of Brembo four-piston calipers grip the discs, and at the exit of your chosen corner the standard VAQ electronically-controlled limited slip differential aids traction. SEAT also allows you to specify a set of sticky Michelin Pilot Sport Cup 2 tyres for £460. They might not have allowed SEAT to undercut Renault's laptime but they do on price, at £540 less than Renault charges to fit a set to its Megane Renaultsport 275 Trophy. Exterior changes are relatively minor. Whether you opt for the Cupra 280 in five-door or three-door SC specification, just a set of 19-inch alloy wheels and subtle body-colour side skirts give visual evidence of your investment. SEAT is quick to tout the car's usability though, as the Sub8 Performance Pack makes no alterations to the car's healthy specification seat. Power too is unchanged, meaning 276bhp from the familiar 2.0 TFSI power unit, a 0-62mph dash of 5.7 seconds with the DSG transmission and up to 44.1mpg on the combined fuel economy cycle. For those unable to afford the full-fat Cupra, SEAT has added Cupra Black-Line and Cupra White-Line packages to its Leon range. So-named for their exterior shades, each nets you contrasting Cupra 19-inch alloy wheels, tailgate lettering and door mirrors. The cost of either pack is £500. Cupra 280 buyers can now also specify Cupra-branded bucket seats for £1250. Featuring an integrated head restraint, the seats are trimmed in Alcantara and leather with white accents. Ticking the option box also specifies the Winter Pack, with heated seats, headlight washers and heated washer nozzles. All four packs are available to order now.