Sad you missed out on the Cupra R hatch? SEAT are building more, only with extra boot space 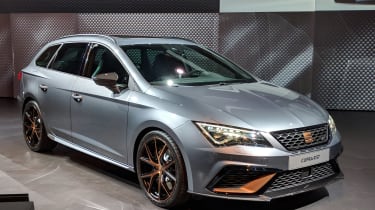 SEAT has revealed a hot Cupra R version of its Leon ST estate car. Following on from the limited run Cupra R hatchback, the newcomer packs 296bhp, four-wheel drive and a host of cosmetic changes, including plenty of the copper coloured accents that will be calling card of models produced under the newly announced Cupra sub brand. No prices have been revealed for the Leon ST Cupra R, but expect it cost well in excess of £30,000 when it hits showrooms later this year.

Visually, the Leon ST Cupra R follows the template set by the hatchback, meaning you get a copper-coloured finish for the badges, door mirror caps and lower grille inserts, plus the same hue for the 19-inch alloys. There’s also a jutting carbon fibre front splitter mounted to the deeper front bumper. However, unlike the hatch, there won’t be any bespoke panels, which suggests it’ll be built in bigger numbers on the regular production line – the hatch’s special additions meant it was hand-finished at SEAT Sport. 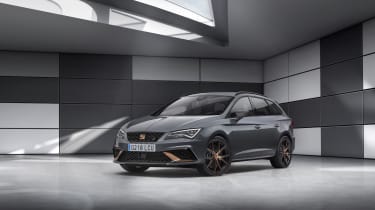 Further evidence of the ST’s more mainstream approach is found under the skin, where it’s mechanically identical to the standard car. That means it gets the same 296bhp turbocharged 2.0-litre that’s mated to a six-speed DSG twin-clutch gearbox and 4 Drive all-wheel drive transmission. As a result, you can expect an identical 0-62mph time of six seconds and a top speed of 155mph.

However, like the Cupra R hatch there will be a new exhaust system that promises to deliver a sportier and more authentic soundtrack. SEAT has also suggested that the ST will get the same upgraded Brembo four-pot front brake calipers as the hatchback, while pictures of the car suggest that Michelin Pilot Sport Cup 2 tyres will be an option.