The Seat Leon Cupra remains a fast and fun hot hatch, but there are better cars in this very competitive sector 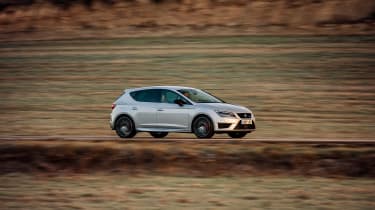 To mark the 20th anniversary of its Cupra performance sub-division Seat has refreshed the range-topping Leon hot hatch. The Leon Cupra 290 replaces the 280 and the new name suggests power is up by 10bhp – making this the most powerful Seat ever.

The Leon Cupra 280 was always a slightly peripheral hot hatch in a very competitive sector, but it did combine strong performance with very capable dynamics. It also spawned the Leon Cupra 280 Ultimate Sub8, which remains the fastest front-wheel drive car we’ve ever tested. 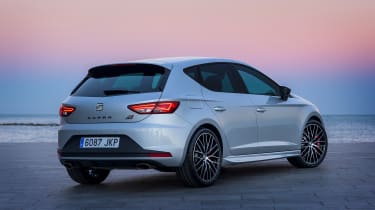 A sports exhaust is now standard fit. It saves 5.8kg as well as reducing back pressure and, we’re told, producing a more stirring soundtrack.

There are still two transmission options – a six-speed manual gearbox and the optional six-speed twin clutch DSG, which commands a £1350 premium.

The fastest model in the Cupra 290 range is the SC with the DSG gearbox, recording a launch control-assisted 5.6 second 0-62mph time. The manual ST sets a still impressive 6.0 second dash to 62mph. Top speeds are limited to 155mph across the board.

The Leon is based on the same VW Group MQB platform that underpins the likes of the VW Golf R and Skoda Octavia vRS. Unlike the range-topping Golf R it’s front-wheel drive only, although it does come fitted with a Haldex-type limited slip differential as standard to make the most of its 286bhp.

Seat’s Cupra Drive Profile system offers Comfort, Sport and Cupra drive modes, plus a customisable Individual setting that allows you to configure the drivetrain, steering, dampers and differential to your liking. The ESP system can be fully deactivated, but only by delving into the menu system. 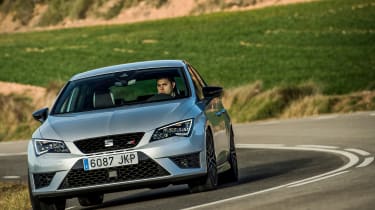 The Sub8 Performance Pack is carried over from the previous version. For £2050 it adds 19-inch wheels in black or orange and heavily uprated Brembo brakes. For another £460 Seat will add sticky Michelin Pilot Sport Cup 2 tyres. The £4250 Ultimate Sub8 package includes all of the above, but cuts weight by removing some of the speakers and the air conditioning system. Bucket seats are a £1250 option.

With Seat’s Full Link system fitted as standard all Leon Cupras are ready to connect with Android and Apple smartphones.

It isn’t possible to identify the additional 10bhp, particularly because this is an engine that’s best driven on its enormous torque reserves, but it remains an effective hot hatch power unit. It’s muscular from low down in the rev range and throttle response is sharp, while the top end is a useful part of the rev band if not quite electrifying.

Driven back to back with the outgoing model you might be able to identify the 290’s newfound voice, but in isolation it’s largely unchanged. The soundtrack within the cabin is still quite gruff, though we did tease one or two pops and cracks from the exhaust during our test drive.

Regardless of which mode the steering has been set to the 290’s helm is always ever so slightly vague – more so than a quick Golf’s, for instance – which can be disconcerting in faster, sweeping corners, but once the chassis is loaded up the resistance does build naturally.

It’s a similar story with the chassis. There’s a degree of looseness to the initial few centimetres of damper travel, giving a very slight sense of remoteness to the body control, but once you’re really into the corner with the car leaning hard on its outer tyres that sense fades entirely. The grip on the standard Continental tyres is very strong, but on the optional Cup 2 rubber there’s enough turn in and mid-corner grip that braking for bends soon seems rather unnecessary. The speed a Cupra 290 Sub8 will carry down a road is truly staggering.

Similarly, the standard brakes are strong, but the huge Brembo items give massive stopping performance, which is sustained over a fast run across a twisting mountain road. The electronically-controlled Haldex-type LSD does a good job of deploying the torque to the road, but something like a Quaife torque-biasing differential would be more effective still. 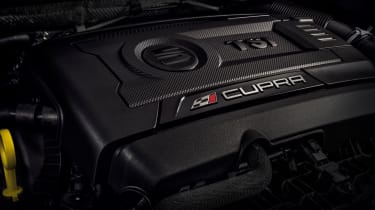 The manual gearbox still has a very slick, well-oiled and precise throw, but a slightly more mechanical action would not go amiss.

The cabin is unchanged from the outgoing model, so it feels solid and hard wearing but it lacks the design polish and overall build quality of the Golf – the group works hard to protect its carefully managed hierarchy.

The Leon Cupra remains an impressively fast and capable hot hatch, but the are alternatives at this price point that offer even more sparkling dynamic ability with, in many cases, even more power.

The 290 ST fares a little better in this company because only Skoda and VW also offer estate versions of their quick hatches.

BMW’s next M3 to be available in manual or auto; with and without all-wheel drive
Visit/ferrari/ferrari-f8-spider