SEAT’s ‘Golf R Estate’ offers almost everything its VW twin does, but the slightly more powerful R is perilously close on price. 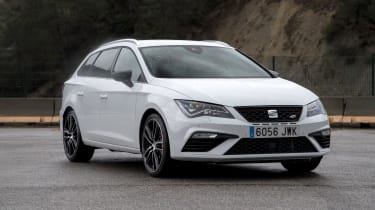 Just as with the equivalent hatchback models, SEAT has updated the ST version of the Cupra 290 to the new 300 specification, and that front-wheel drive ST will henceforth only be available with a manual gearbox.

However, it’s also added a four-wheel drive variant, marketed under the ‘4Drive’ banner, and that is only available with the DSG gearbox, just as VW decrees with its own Golf R Estate.

The firm will tell you the lower weight and increased agility of the front-wheel drive setup remains their configuration of choice for the Cupra hatches, but having carried out the necessary engineering work to make the Leon X-Perience crossover a reality, signing off on a four-wheel drive Cupra version of the ST with its similar basis was much easier. Incidentally, they have built an all-wheel drive Cupra hatch mule, but there’s no word on whether it will reach production.

The ST Cupra 300 uses the same 296bhp 2-litre TSI engine as the other revised ‘300’ models in the Cupra range, now also generating an additional 22lbft of torque - 280lbft in total - from just 1,800rpm. This is channelled via the familiar Haldex differential to all four wheels, with variable dampers fitted as standard (unlike the Golf R) and configurable drive modes that include adjustment of steering weight and engine characteristics.

The standard brakes and wheels can be upgraded as part of a Performance Pack with Brembo discs and calipers along with lighter 19” alloys, which also provide deeper side skirts and the choice of orange or black detailing.

Thanks to being the only Cupra currently with four-wheel drive, it’s the estate version that records the quickest 0-60mph sprint amongst its close family rivals, just dipping below five seconds with a full bore launch aided by launch control.

Like the other Cupras it is electronically limited to 155mph, and delivers its acceleration in committed bursts interspersed with the parp of the ignition cut on upshifts, the grainy, harsh voice of the TSI engine offering more volume than musicality. The DSG ‘box offers very swift gearchanges, but it’s frustrating that the ‘box will upshift automatically at the redline even in manual mode, and that the manual control of the gear lever is arranged the wrong way around.

Opting for the orange highlighted Performance Pack isn’t probably the subtlest of options, but it is nevertheless entirely possible to amble around in the ST Cupra being convinced it’s a practical, sensible estate car. The DSG ‘box shuffles the ratios quickly and the ride with the variable dampers in their most relaxed setting is firm, but far from uncomfortable. The latest-spec Leon cabin is well equipped as standard, and there’s the option of colour sat nav and all the latest driver assistance systems. And then you give the ST full throttle or chuck it into some challenging bends and it simply devours the road in front. 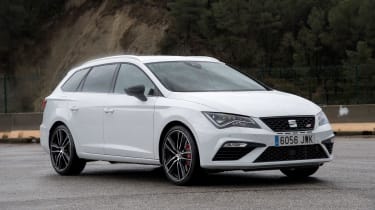 Naturally, the four-wheel drive setup gives the car a different character over its front-drive relations, adding more stiction to the steering response, and smoothing out any torque reactions at the ‘wheel (even though the hatch is admirably free of anything resembling torque steer).

Having said that, as soon as you up the pace you’re aware of the additional weight of the car compared to the Cupra hatchbacks, not just in terms of overall mass but where the weight is in the car – specifically towards the rear. The ST lacks their keenness to change direction: it’s a terrifically capable car, but not a wildly exciting one despite what the figures suggest, and it doesn’t quite have the Golf R’s benign poise; its finesse.

That makes the ST Cupra 300 4Drive one of either two things. On one hand it’s a compact, ludicrously fast way to transport up to 1,470-litres of luggage: on the other, it’s a compromise over the Cupra hatchback in return for an ability that few actually need.

At £34,170 the obvious rival for the all-wheel drive ST Cupra is the Volkswagen Golf R Estate, also DSG-only, at £34,986. That’s a little too close for comfort for the Spanish car. Otherwise there’s very little that teams quite as much performance with genuine practicality at this price.