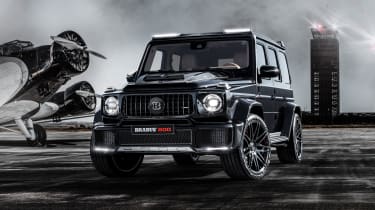 Brabus has revealed a successor to its measly 700bhp version of the Mercedes-AMG G63. Called the 800 Widestar it takes the total output of the boxy SUV’s 4-litre twin-turbo V8 to almost 800bhp, with 737lb ft of torque. Both the exterior and interior of the model also receive significant modification to match the increase in power.

Shown for the first time at the 2019 Geneva motor show, the modified G-class’s new-found power takes it from 0 to 62mph in a claimed 4.1sec – around 0.4sec quicker than the standard G63 – and on to an electronically limited top speed of 149mph. The additional 212bhp and 111lb ft of torque over the standard version come from two new Brabus turbochargers with a larger compressor unit for 1.6bar of boost, plus an ECU tune to match the new hardware. A new valved stainless-steel exhaust system, with two side-exit pipes either side of the car, also helps the powerplant breathe.

Exterior upgrades for the model include flared wheelarches at the front and rear to create an additional 4 inches of width, larger front air intakes for improved cooling, redesigned front and rear fascias, and LED lighting on the running boards and under the side intakes; almost all of the exterior Brabus logos light up, too. The new rear wing, bonnet and spare wheel cover are all in carbonfibre, and to fill the larger arches there are Brabus-specific forged wheel choices ranging from 20 to 23 inches and fitted with 305-section tyres at the rear. 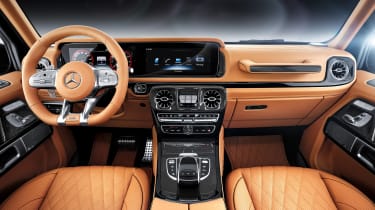 Inside, the Brabus 800 Widestar receives a substantial overhaul too, with new aluminium paddleshifters, customisable wood and/or carbonfibre inlays, a Rolls-Royce-esque ‘Starry Sky’ headliner, stainless steel scuff plates with backlit Brabus logos and a custom Mastik leather and Alcantara finish. As with almost all Brabus-fettled cars, customers will be able to configure their 800 Widestars in almost every way possible.

Pricing information for the kit has yet to be announced.