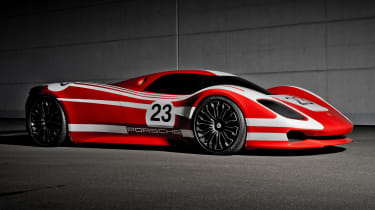 Porsche has previewed a modern-day interpretation of the Le Mans-winning 917 racer to mark its 50th anniversary, which will be revealed at the Porsche Museum in Leipzig.

Although details are scarce, links to the road-going 918 Spyder of 2013 can be seen in the same wheel design, oblong headlights and fuel filler cap, but applied to a set of proportions reminiscent of the original racer from 1969, albeit with a toned down take on the original’s distinctive rear overhang. In the initial sketch, it’s painted in a red and white livery inspired by the Porsche Salzburg 1970 Le Mans 24 hours-winning 917, one of the defining schemes made iconic by its racing success.

Unlike the GT2 RS 935 revealed last year to celebrate its the iconic 935/78 ‘Moby Dick’ racer’s 70th birthday, this 917 concept won’t reach production, and rather remain a pure design study. This comes despite the brand’s interest in the incoming ‘Hypercar’ class, although Porsche has not confirmed its commitment to the series. 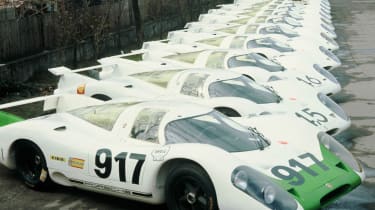 Porsche will debut the 917 concept at its “Colours of Speed – 50 Years of the 917” exhibition between May 14th and September 15th, honouring the 50th anniversary of the model. It will sit alongside a total of 14 exhibits, including an incredible collection of ten 917 models.

Sparked by a change in regulations for Le Mans, the 917 debuted at the 1969 Geneva motor show with a space-frame chassis, 4.5-litre flat-12, composed of two 2.25-litre Porsche flat-six engines, and a range of titanium and magnesium components, keeping weight to a minimum. The car underwent vast changes during its lifetime to maximise its potential, starting at around 520bhp in 1969 and climbing to in excess of 1000bhp in its most powerful configuration. The car's staggering power allowed it to sprint from 0-62mph in just 2.3secs in the 917/30 Can-Am variant, and onto a top speed of around 240mph in a test track environment.