Following the reveal of the track-only special last year, the Stuttgart marque has revealed an array of historic liveries for the new 935 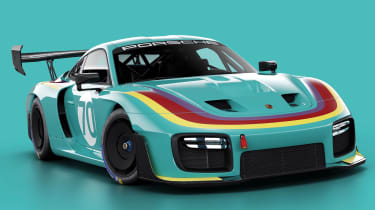 Before the first example of Porsche’s limited-run reinterpretation of its classic 935 racer hits the track, it has been revealed that the model will be offered in an array of liveries that pay homage to racers of the past.

Grant Larson, the man behind the design of the new GT2 RS-based 935, teamed up with Porsche’s in-house design boffins to create new interpretations of seven historic paint schemes. Larson said: ‘We have reinterpreted the various racing eras of the 935 using computer design programs, initially orientating ourselves geometrically on the design of the Martini racing version. However, we had to recreate all graphical data using virtual reality and finally apply it to the outer skin of the 935. That was very exciting in itself. We can hardly wait to see the new 935 on racetracks around the world. Every single livery is very exciting and matches this unique Porsche perfectly like a tailor-made outfit.’

Most of the liveries are based on the colours of partners or private racing teams that featured on original Porsche 935 during the late ’70s and early ’80s. Customers will be able to choose from the iconic Gulf blue of John Wyer's team, the Interscope design of Kremer Racing, the black and gold of John Player Special, and the colours of Momo, Sachs, Vaillant and Salzburg. 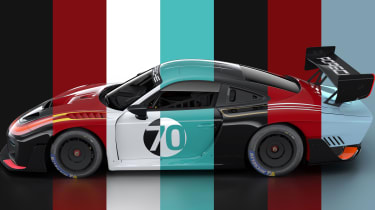 The new 935 was created by Porsche Motorsport to celebrate the department’s 70th anniversary, and is a homage to the 935/78 ‘Moby Dick’ race car of the 1970s. Revealed at Rennsport Reunion, the new 935 isn’t homologated for championship racing, rather the 77 examples are expected to be used in club motorsport events and at trackdays.

Based on the current 911 GT2 RS road car, the new, €700,000 935 is fitted with the same 700bhp, 3.8-litre twin-turbo flat-six engine and seven-speed PDK transmission. There’s even Porsche Stability Management fitted as standard, along with ABS brakes. 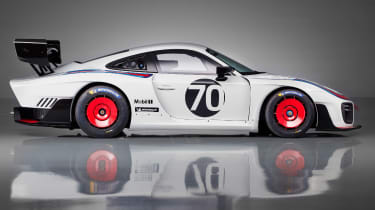 Replacing the 911 GT2 RS’s regular steel and aluminium body is a modern-day interpretation of the Moby Dick’s extreme aerodynamic bodywork, manufactured in carbonfibre to reduce weight.

Inside, the GT2 RS’s road car interior has been switched for something more reminiscent of a Le Mans winning RSR, with a full roll-cage, carbonfibre dash and bucket seats. Porsche Motorsport has even gone as far as switching the regular PDK shift lever for one made from wood, reminiscent of that in the 917.

Weighing 1380kg, the new 935 features an emergency escape hatch in the roof, air jacks for pit stops and an instrument display, complete with data logger, straight from a 911 RSR racer. 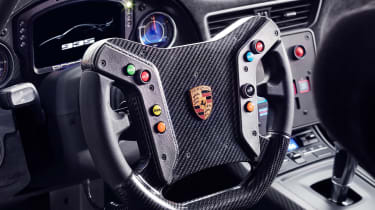 Brakes are cast-iron discs with six- and four-piston calipers front and rear respectively, and accompanied by a cockpit-mounted adjustable bias valve. The front suspension is MacPherson struts with forged links and three-way adjustable motorsport dampers, with reinforced tie-rods. There’s a multi-link set-up at the rear. The wheels are 18-inch forged centre-lock items, measuring 11.5 inches wide at the front, 13 inches at the rear, and are fitted with Michelin tyres.