Following the reveal of the updated standard car, the Stuttgart marque has revealed the GLC Coupe facelift for 2019 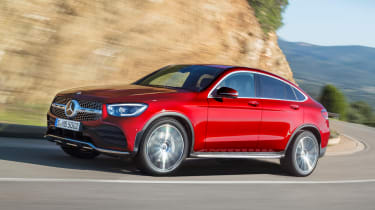 Just a few weeks after the reveal of the standard GLC facelift, Mercedes-Benz has shown its updated GLC Coupe to rival the BMW X4, with new engines and an array of tweaks to match the rest of the range.

As with the standard GLC facelift seen late last month, the exterior has received subtle changes to the trim with new standard-fit chrome elements, as well as new front and rear LED light designs with updated optics.

New, more efficient engines are on offer at launch, with the range consisting of four-cylinder diesel and petrol power plants. The range starts at the 194bhp, 110lb ft petrol-powered GLC 200 and spans to the 241bhp, 368lb ft GLC 300d. All petrol engines currently offered are electrified with the use of a 48V EQ Boost hybrid system, with all engines putting power to all four wheels. More engine options will be available further down the line. 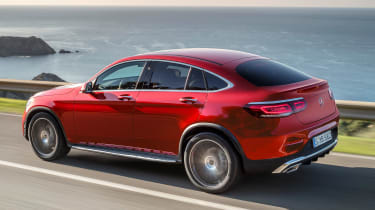 Though performance figures for these environmentally friendly units are yet to be announced, we can’t imagine they’ll be blistering. However, a facelifted GLC 63 Coupe will make an appearance, featuring a bump in power over its current 469bhp and 479lb ft in standard form for a marginal improvement on the already-brisk 4.0sec 0-62mph time.

Inside is where the biggest changes have been made, with the model featuring the brand’s all-new infotainment system (MBUX). First seen on the A-class, the system allows users to interact in various ways, from the new touch controls on the steering wheel, to the optional gesture control system, voice control and more. A new centre console-mounted touchpad also replaces the rotary pushbutton version of the previous car, and a completely revised steering wheel is available in two different types. The car features a 12.3-inch screen behind the steering wheel, as well as a 7- or 10.25-inch central screen at an additional cost. Alongside the new assistance systems, the car also sports a 360-degree camera to help with low-speed manoeuvring.

As has become commonplace in most new cars of today, the facelifted GLC Coupe features the brand’s Active Brake Assist, Active Steer Assist, Trailer Manoeuvring Assist and more to improve safety and make life a little easier for drivers.

Pricing details are yet to be announced.