Limited to just 600 units, the special edition gets a striking orange paint scheme amongst other tweaks 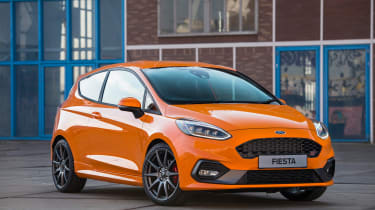 Ford is no stranger to outlandish colours on its Performance models, with the famous ‘nitrous blue’ shade on the Focus RS and various bold special editions making an appearance over the model’s lifetime. The Fiesta ST has received the same treatment, with the addition of the Performance Edition.

Limited to just 600 units and set exclusively for the UK, the model is based on the range-topping ST-3 and features a new ‘Deep Orange’ paint colour alongside a whole host of other performance-oriented tweaks. New 18-inch, ten-spoke lightweight wheels make an appearance, shaving an impressive 7kg from the standard ST-3 wheel set. As they’re ‘flow-formed’ as opposed to cast, they’re also stronger and more durable according to the marque. All wheels are finished in a winter-resistant, triple-layer ‘Magnetite’ shade... or grey, to you and me.

Alongside the marginal reduction in weight from the addition of new wheels, the Performance Edition also comes with a new coilover suspension pack, honed at the Nürburgring by Ford engineers. It lowers ride height by 15mm at the front, 10mm at the rear and gives drivers the ability to adjust bump and rebound settings manually. Springs are also finished in Ford Performance Blue for some subtle flare. 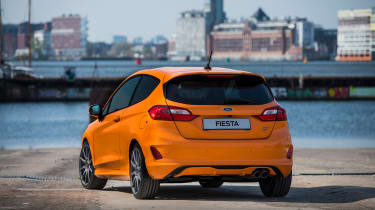 Being an ST-3, the Performance Edition also comes with plenty of extras as standard, including LED headlights, an upgraded B&O sound system and the Fiesta ST Performance Pack. The latter includes a Quaife limited-slip differential, launch control and performance shift light indicators.

Andy Barratt, managing director of Ford of Britain, said: ‘This ST is for customers who are performance-oriented drivers and tuning enthusiasts who demand maximum fun on the road combined with a sporty appearance – the ultimate Fiesta ST.’

Pricing for the Performance Edition is set to be announced next month, but will set you back at least £3000 over the £22,450 of a standard ST-3. Order books will open in June, with the first cars due to hit roads in September.