AMG has tweaked the new GLC inside and out, but keeps its firebreating twin-turbo V8 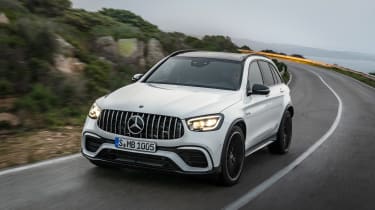 Mercedes-AMG has given its hot mid-sized SUV a facelift for 2019, in line with the standard GLC range, updating its design inside and out to help compete with an increasing number of performance rivals in the sector.

Outside, both the wagon and coupe GLC 63 models feature sharper front and rear lights, new exhaust surrounds, a wider, more aggressive ‘Panamerica’ grille and an electronically controlled differential as standard. New 21” wheels and a graphite grey metallic paint can also now be optioned, as well as new colour and trim finishes.

The interior has also been through an overhaul, bringing it up to speed with the rest of the range by now incorporating the latest MBUX infotainment system together with optional gesture control, and an extended voice control function. AMG’s new sports steering wheel has also been fitted, and for an additional cost (or as standard on the ‘S’), this includes the new wheel-mounted driver mode control dial. This allows the driver to alter multiple settings on one dial, with a small screen switching between modes depending on the desired use, whether it be to make the exhaust louder, or turn the ESP down a notch. The updated infotainment system is accessed via a new 10.25-inch central screen, while the two analogue dials of the previous GLC are also replaced with a full-width colour display, as seen on the recently updated C-class. 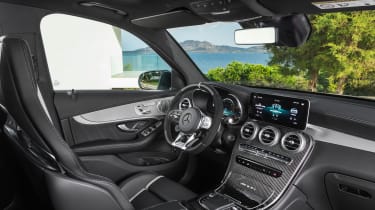 Performance is unchanged for 2019, but it’s still no slouch with the same M177 turbocharged 4.0-litre V8 found in a majority of AMG’s 63 range. In this application, the standard GLC 63 produces 469bhp, with 479lb ft of torque sent to all four wheels through a 9spd wet-clutch automatic gearbox. In range-topping S guise, power and torque are increased to 503bhp and 516lb ft of torque. 0-62mph comes in just 3.8secs for the range-topping S, and 4secs for the standard car, top speed is pegged at 174mph. The GLC 63 S also remains the fastest SUV around the Nurburgring, with a time of 7 minutes and 49 seconds, for now.

Pricing and availability for the updated GLC 63 are yet to be announced in the UK, however we suspect only a small rise on the current models, which cost from £66,905 for the standard GLC 63, rising to a faintly astonishing £88,809 for the limited-run GLC 63S Edition 1.