The storming DBS Superleggera is now available in drop-top form, yet retains its 211mph top speed 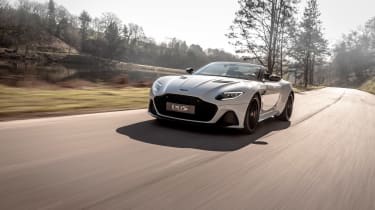 The most dramatic change is the folding fabric roof, itself the same unit as the one found on the DB11 Volante — a model that also shares its underlying VH-II aluminium architecture. From here, the DBS Volante receives a rather more serious collection of components, starting with the aforementioned V12 engine. At 5.2-litres, the V12 is twin-turbocharged, producing a peak power of 715bhp at 6500rpm, with an even more astounding 664lb ft of torque available between 1800 and 5000rpm.

Power is sent to the rear wheels via an eight-speed ZF-sourced automatic transmission mounted on the rear axle, and then distributed via a normal limited-slip differential. With such vast power and torque going through the rear wheels alone, the DBS Superleggera has earned a reputation for lively handling in greasy conditions, and we suspect the Volante will be no different.

As its Superleggera nomenclature might suggest, the Volante’s weight has been (slightly) reduced over that of its DB11 counterpart, mostly through the fitment of carbonfibre body panels and standard carbon-ceramic brakes. The Volante is no lightweight though, with a ‘dry’ figure of 1863kg, making this a near-two ton convertible with fluids. The considerable weight doesn’t seem to blunt performance though, the car reaching 62mph in just 3.6sec, while the top speed is also unchanged at 211mph – quite a number for something with a roof made from fabric.

The DBS’s clever aerodynamics have also been adapted to the drop-top roof, but here instead of air entering the body in a slip vent aft of the rear windows and running through the hollow, double-walled bootlid, air now flows over the rear haunches and onto a static rear spoiler. Total downforce at the Volante’s 211mph top speed is only 3kg down on that of the Coupe – a remarkable feat considering the substantial change to the body shape.

> Click here for our review of the Aston Martin DB11 Volante

The multi-layer acoustic fabric roof itself is available in eight colours, and raises from underneath its tonneau in 16 seconds. Maintaining the car’s GT credentials are two rear seats, although as in the Coupe, these aren’t really usable for actual human beings.

From here, the DBS Superleggera Volante’s specification closely mimics that of the Coupe, with a familiar interior layout (itself almost identical to that of the much less costly DB11), and various switchgear and tech borrowed from technical partner Mercedes-Benz.

The new DBS Superleggera Volante will reach customers later this year, with prices starting at £247,500, before the numerous and expensive options. This is a substantial jump over the admittedly less powerful Bentley Continental GT Convertible W12 at £176,000, not to mention £10k more than the even faster McLaren 720S Spider. Still, as the ultimate expression of Aston Martin’s GT credentials, the DBS Superleggera Volante will be the ultimate series-production drop-top V12, for now.