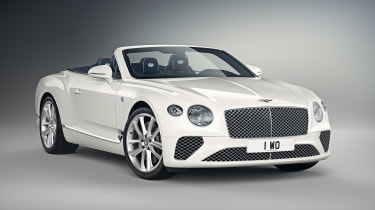 Mulliner has been creating luxury on wheels since before the automobile came into existence, first producing luxurious horse-drawn carriages in the 1500s. Almost a century since it first got its hands on a Bentley, it has worked its magic on the new Continental GT Convertible, creating a very limited-edition model inspired by the Bavarian region.

Designed by Bentley’s director of design, Stefan Sielaff, the model pays homage to the beauty of the mountainous German state, featuring a number of exclusive touches to set it apart from an ordinary Continental GT.

The overall theme consists of white and blue – the hues of the Bavarian flag – with Glacier White exterior paint, a contrasting Imperial Blue roof and blue hide inside to match. Bespoke white and blue contrast stitching also features inside, alongside a painted Mulliner Glacier White dash. 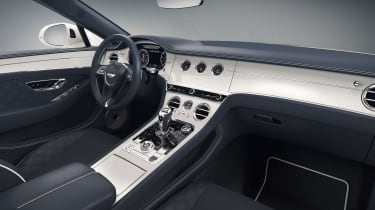 At the front, you’ll find the same chequered pattern as on the Bavarian flag, a theme that continues on the headrests, chrome tread plates and enamel badges on the wings. As with most Mulliner-spec Bentley models, chrome highlights are plentiful, and 22-inch Mulliner wheels can also be found.

The model’s W12 power plant doesn’t see any boost in performance, but with a rather brisk 3.8sec 0-62mph sprint and a top speed of 207mph, we’re not sure it needs it. Though the model does lose some rigidity and gains some weight over the coupe, the Continental’s excellent mile-munching abilities aren’t lost with the removal of the roof, and should you be the lucky owner of the Bavaria Edition, you can do it in a little more style than the rest.

Although pricing information hasn’t been announced, with just a single example set to hit the roads, we can’t imagine it’ll be cheap. The model will be officially revealed in the flesh at an exclusive event in Munich.