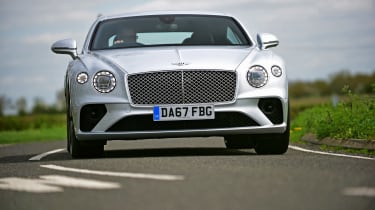 While the first incarnation of the Continental GT sold well and was well respected in some quarters it was a car with which we never entirely gelled. Driven sedately it was rather good, but up the ante a little and its VW Phaeton underpinnings gave the game away, leading to a machine that never felt composed when trying to hustle its 2.2-tons around.

Thankfully this new machine is based on Porsche’s Panamera and it’s an entirely different ball game, looking altogether more like the luxury GT with a new set of stylish clothes. It really is all-new from the ground up, even the 6-litre twin-turbo W12 is all-new, and figures of 626bhp, 664lb ft aren’t to be sniffed at, especially when it’s capable of launching the GT from a 0-62mph in just 3.7sec and on to a top speed of 207mph.

But a GT shouldn’t just be about straight-line gusto and this is where Bentley has really nailed it with the Continental GT. It needs to be the pinnacle of refinement and waft its driver and passengers to the South of France in hushed civility but also entertain when asked to tackle a more challenging task. It nails the first of those criteria with a wonderful cockpit ambiance, supreme build quality and with a sense of majesty with the way it flows across terrain.

Hit the Sport button though and give the Bentley a more demanding challenge and it’s more than up to the task with a level of agility that simply isn’t expected. The car’s computer-controlled air suspension does a bewilderingly good job of keeping its mass in check – even after a bit of a diet the GT still weighs 2169kg – and it’s phenomenally poised when you do start to throw the car around. With a reconfigured four-wheel drive set up it’ll even let you indulge in power oversteer antics should you be so inclined.

That it’s capable of making a pretty good first of being a sports car while cosseting you like you’re sitting in your favourite armchair at a gentleman’s club while smoking a Montecristo No. 2 after a jolly fine lunch is a stroke of genius.