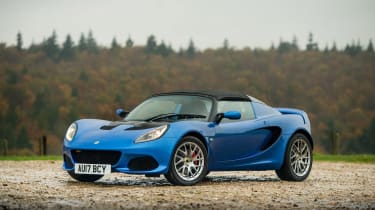 Much has happened at Lotus in the last 20 years but one thing has remained a constant – the enduring brilliance of the Elise. It’s called the Sport these days and there are two versions: one with a naturally aspirated 134bhp 1.6-litre engine and the other with a supercharged 1.8 that produces 217bhp (220PS).

The Sport 220’s power-to-weight ratio is perfect. The entry-level car’s power is a bit too modest and the next up from the 220, the Cup 250, has more than you need. Not surprisingly, the 220 is fast, but what’s particularly impressive is how good its engine feels. For a modern four-cylinder it also sounds fantastic, almost as if it’s drinking and breathing through a pair of DCOEs.

The power delivery has an old-fashioned flavour to it, too, the characteristic way a supercharged engine feels as if it’s got a larger cubic capacity rather than simply more power. So the power builds seamlessly and, with gearing that is perfectly matched, thrust out of corners or when overtaking is impressive. Lotus’s open-gate gear lever is a big improvement on previous shifters and sexy enough to not need a surround or gaiter. 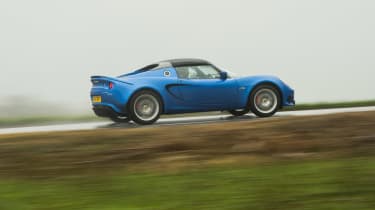 It’s the Elise’s road manners that have always really impressed and despite modest Yokohama Advan Neovas, 175 section on the front and 205s on the back, in the dry, the grip is prodigious and, on the public road at least, sliding about is unlikely. There’s a surprising amount of grip in the wet, too, aided by the remarkably sweet steering. It’s not just the Sport 220’s realistic performance that appeals, there’s also its modest dimensions. It’s so easy to place on the road and position for corners.

There’s a whiff of nostalgia about the Elise as John Barker explains: ‘There’s a wonderfully retro feel about this Elise, in all the right ways. It’s light like most modern cars aren’t, sounds enthusiastic, and the gutsy engine flings it effortlessly down the road. Of course, you get grippy handling, a great ride and there’s a solid, quality feel too. This is a great Elise.’ Retro is an obvious word to use but it’s an unfortunate one because it implies old-fashionedness. Actually, sports cars should never have gone away from the original blueprint of low weight, accurate steering with accurate feedback, supple suspension and overall simplicity.

‘Twenty-one years on and no one has matched the Elise in terms of undiluted driving enjoyment,’ says Gallagher. ‘It feels as refreshingly brilliant as it did when we first drove it, only now every area has been improved upon.’ Time spent in this car has been a tonic. A glorious relief from a life that these days is spent writing endlessly about SUVs and listening to nonsense spoken about self-driving cars.

The Lotus Elise Sport 220 shows not only how it used to be done, but how it should still be done.