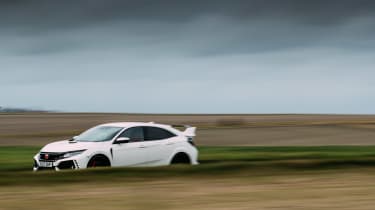 For some folk Honda’s Civic Type R will be immediately deleted from their hot hatch shopping list for the way it looks. Have we been transported back to the 1990s? With huge spoilers and more scoops than the National Enquirer the Civic goes down very well with the kids, but perhaps less so with a more mature buyer.

While aesthetics are important, to simply dismiss the Type R as a bit of a boy racer is to miss out on one of today’s sublime driving experiences. We don’t give out five star reviews lightly, but the Civic got one and comprehensively dusted SEAT’s Leon Cupra 300 and the Ford Focus RS when we pitched them together in our Supertest in evo 241.

Despite its looks there’s a civility about the Type R that you wouldn’t expect to find in a machine that looks like it’s just escaped from a track day but its ride is refinement personified, it has plenty of interior space as well as a decent boot, yet it’s still capable of nudging 170mph.

Hatchback practicality is all well and good but what we’re looking for in this class is something that can really entertain and thrill, and the Civic doles these out by the bucket load. The steering is direct and slack free and it’ll devour apices time after time with its big Continentals finding grip where you might have expected none would be found. There’s very little in the way of wheelspin, putting its 316bhp to good use in all circumstances, even when it’s cold and wet.

The engine’s a real gem too, managing to sound and feel like a gutsy naturally aspirated in-line four with a thrilling top end, but at no time does it corrupt the steering feel which is no mean feat when putting over 300bhp through the front wheels. The brakes are excellent and fade free, the seats are low slung and supportive, the pedals perfectly placed and the gear shift’s incisive and perfectly weighted.

In short, the Civic Type R is everything you could wish for in a hot hatch – it even rides well for goodness sake. A brilliant drivers’ car, yet one that can happily play the family wagon role, too. Look beyond the boy racer image and there’s a wonderfully crafted machine hiding behind those spoilers and scoops.

Hyundai i30 N: for being so much better than anyone expected with grip, poise and entertainment in abundance.