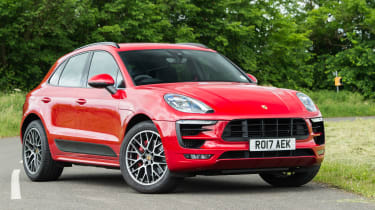 Put simply, the Porsche Macan turns the SUV rules of engagement on their head. Up until now, most have been so dynamically compromised, Porsche’s larger Cayenne included, that a drive in one caused your heart to sink faster than the fuel gauge in an AMG G63. Not the Macan, and particularly not in GTS guise.

It all starts with the driving position, which despite the raised ride height gives the sense that you’re hunkered low in the car, helping create an impression of an instant connection with the tarmac. Then there’s the steering, which has more than a hint of the weight and response of a 911 or Boxster. There’s plenty of bite on turn-in, too, the Macan locking tenaciously onto your chosen line and clinging on gamely all the way to the exit. Four-wheel drive means there’s lots of traction to fire you up the next straight, yet the rear-biased set-up delivers surprising adjustability, particularly when the surface is slippery – out of slower corners you can even indulge in some bouts of subtle oversteer showboating.

> Click here our full review of the Porsche Macan GTS

Yet it’s the Macan’s body control that really has you scratching your head at the physics-defying magic that Porsche has weaved into the springs and standard adaptive dampers. In its sportiest setting, the GTS feels taut and composed, resisting roll in a way nothing this tall – or heavy – should be able to. Sharp crests and compressions are shrugged off with disdain, while mid-corner bumps are steamrollered into submission. No, it’s not delicate or even that involving, but there’s a curious satisfaction to be had from driving a 1895kg SUV that’ll dust most hot hatches on a testing B-road. 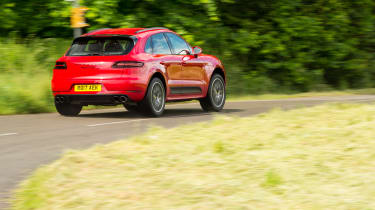 The Macan can live with these pocket rockets on the straights, too, its turbocharged 355bhp 3-litre V6 allowing it to cover the 0-62mph sprint in just 5.2 seconds. Granted it’s not the most charismatic-sounding engine, even with the added crackle of the optional sports exhaust, but the combination of 369lb ft of torque from just 1650rpm and the effortlessly quick and smooth eight-speed PDK transmission mean it can cover ground alarmingly quickly. It’s only when slowing down that the Macan’s mass really starts to tell. The standard iron-disc set-up is powerful and benefits from a beautifully weighted and progressive pedal action, but the strain shows after repeated stops.

Driven with a little more restraint, the Porsche slips easily into your daily routine. It’s comfortable and refined, with an interior that’s spacious and exquisitely finished. In this context it’s not hard to fathom the current fashion for SUVs. Ultimately, at evo we’ll always plump for a fast estate if performance and practicality are what’s required, but if only an SUV will do, the Macan is really the only option if you still want to enjoy the drive.

Jaguar F-Pace: for feeling more agile and engaging than its height and weight would suggest.

Porsche Cayenne: for handling well and impressive refinement despite still being a big old bus.