The most exciting Macan in the range 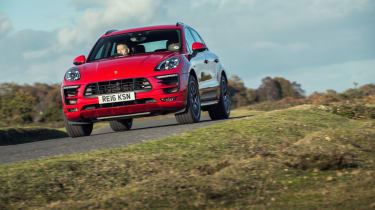 Porsche’s GTS model line has quickly established itself as the defacto spec to go for if Porsche Motorsport’s GT road cars have already succumbed to the speculators and those more interested in investment returns rather than driving thrills.

The latest 911 Carrera GTS has proven itself to be the pick of the 991 range, so too the Cayenne GTS. The Panamera, Boxster and Cayman were all the better for wearing the letters G, T and S and the upgrades they brought: lowered chassis, tweaked engines, larger brakes and Alcantara generously applied throughout the cabin. It’s why it’s frustrating that we’ll have to wait until the end of the year to enjoy these latter models in GTS trim again.

> Read our review of the Porsche 911 GTS

Porsche’s Macan GTS, then. Although you might assume the GTS would sit at the top of Porsche’s small SUV tree, it actually sits between the regular 3.0-litre petrol engined, twin-turbo S and the full-fat 3.6-litre Turbo in the Macan range, both in terms of price and power. The GTS costs £55,188 in the UK and peak power is 355bhp at 6000rpm, making it just shy of £10,000 more expensive than the 335bhp S model and £7,000 cheaper than the 394bhp Turbo. As well as mechanical changes, the GTS gets a Sports Design body kit and further design changes that major on black highlights – gloss above the waistline and matt below it.

In the past you’d be right to think that Porsche had its competition licked in the junior SUV sector. But while the rest of the Macan range is the best in class when it comes to driving dynamics and enjoyment compared to its natural rivals, the GTS drives straight into a competitive sector that will give the Macan its toughest test yet.

The main changes for the GTS are focussed around the chassis. Its overall ride height has been reduced by 15mm and the Porsche Adaptive Suspension Management (PASM), which comes as standard on the GTS, has had its three settings – Comfort, Sport and Sport Plus – recalibrated to offer a ‘sportier’ setting across the board. There is also a set of matt black 20-inch Spyder wheels fitted as standard and the front brakes are the larger six-piston callipers with 360mm discs as fitted to the Macan Turbo.

Under the bonnet the 3.0-litre twin-turbo V6’s breathing has been improved with a reworked inlet tract and reduced exhaust back pressure for the standard sports exhaust. The turbo’s boost pressure has also been increased by 0.2 bar in comparison to the S, raising the maximum to 1.2 bar and swelling torque to 369lb ft between 1650 and 4000rpm. The end result is a 0-62mph time of 5.2sec (or 5sec if you specific Sport Chrono package) and a top speed of 159mph. 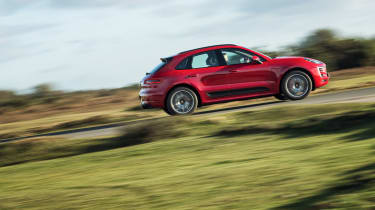 Despite harbouring serious misgivings about the potential sportiness of small SUVs, once you’ve driven it there is no denying that the Macan GTS is a seriously impressive feat of engineering. Things start well, because it sounds rather good, with that standard sports exhaust providing a nicely raucous note from the V6. The gearshifts from the PDK ‘box are also lighting fast when you are in full Sport Plus mode and the claimed 0-62mph time of 5.2 seconds seems eminently achievable. Leave the ‘box in Drive and the shifts are intuitive and quick to shift to meet your needs, but it’s when you opt to use the pair of metal look paddles attached to the back of the steering wheel that you can really get stuck in to the GTS’s performance. There’s rarely a hint that it’s hauling 1895kg.

It is in the corners, however, that it really seems to defy the laws of physics. With the PASM in its firmest setting the GTS turns in with staggering alacrity and the lateral grip feels almost preposterous, as does the body control. Through direction changes it just shrugs off its kerb weight and transitions like a modern  four-wheel drive hot hatch. The steering is also nicely weighted and you can even detect some feel.

There is always a sense that it is bludgeoning the laws of physics rather than bending them subtly, but nevertheless it is something approaching flabbergasting the first time you sample it. With the optional PTV Plus (an electronically controlled differential lock) fitted it will even indulge in power oversteer if you’re brave enough.

Away from driving it like you’ve stolen it, the GTS retains perfectly acceptable road manners when you’re just popping to the shops, quietening down and riding with aplomb. It works best on UK roads in its Sport setting, with the throttle response suitably crisp with the ride and body control on the right side of taught. Sport Plus may deliver the best chassis response, but rough UK roads can catch it out all too often. 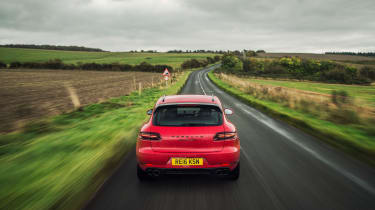 Audi’s RS Q3 is smaller and less powerful (by 20bhp) but also cheaper by about £10,000 and slightly faster to 60mph, reaching the benchmark in 4.8 seconds. It is also full of character with its five-pot engine and surprisingly fun to drive. The Mercedes GLA45 AMG is similarly powerful but not as engaging in the corners.

The Macan’s GTS biggest challenges come from the new batch of sport SUVS, most notably the Jaguar F-Pace S. The British SUV costs from £51,450 and has a 375bhp supercharged 3.0-litre V6.

Audi’s new 349bhp SQ5 will also take the fight directly to the Macan GTS. At £51,200 it undercuts the Porsche by almost £4000 and yet is powered by the same 3.0-litre twin-turbo V6. The Audi gets an eight-speed automatic gearbox, rather than the Porshce’s twin-clutch transmission. Audi claim the SQ5 will reach 62mph in 5.4sec. Finally, there’s Mercedes-AMG £47,875 GLC43, which is also powered by a 3.0-litre turbo-charged V6, features a nine-speed automatic gearbox and is claimed to reach 62mph in 4.9sec.

Stuttgart has given its most driver-oriented, mid-sized SUV a facelift, increasing power and adding tech
Skip to HeaderSkip to Content