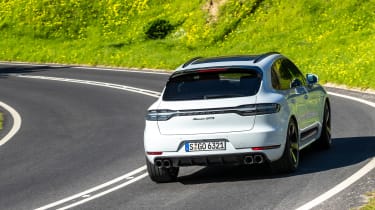 Sporting SUVs might not be in the epicentre of appeal for the average evo reader, but as these things go the new Porsche Macan GTS is about as good as it gets.

In the flesh it looks good, inside and out, and on the road it goes harder than ever thanks to its 375bhp twin-turbo V6. Better still, Porsche has further improved the chassis to a point where you wonder what else they could have done to make it much better. At £58,816 it even seems like decent value beside the mainline competition. Impressive. Here are the details. 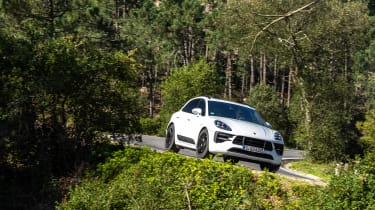 Porsche hasn’t rewritten the rule book with the Macan GTS’s underpinnings, rather it has tickled it in all sorts of ways technically to make it sharper to drive, and more efficient.

It doesn’t have as much power or torque as the recently introduced Turbo version but, says Porsche, the 2.9-litre twin-turbo V6 GTS is the most sporting Macan you can buy because of its character. It rides 10mm lower than any other Macan, Turbo included, while visually it is by far the most extrovert model in the range.

It rides on 20-inch wheels as standard that are of the exact same design as those of the 718 Spyder. At the same time the chassis and suspension are set up to be more responsive, more aggressive than any other Macan’s, with stiffer springs front and rear, a sportier PASM set-up and red brake calipers to provide a subtle visual distinction above other members of the Macan range. PASM and Sport Chrono both come as standard, as does Porsche’s switchable three-stage drive programme that can be altered via a small rotational switch on the steering wheel. 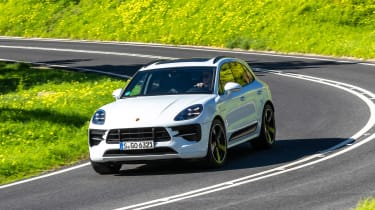 The twin-turbo 2.9-litre V6 of the GTS is essentially the same as in the new Macan Turbo (and Audi RS4), but in this instance produces 375bhp and 383lb ft, enough to send the 1985kg GTS to 62mph in 4.7sec and on to a top speed of 162mph. Response to the throttle has become sharper and keener, claims Porsche, due to lag having been ‘virtually eliminated’ thanks to a new induction and exhaust system.

The gearbox remains a seven-speed PDK, but again the software has been tweaked to provide even quicker shifts in Sport + mode, and even smoother shifts in Normal. 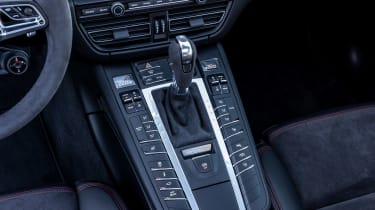 It’s hard not to be impressed by the GTS’s pure range of ability. Select Normal via the simple rotation switch on the wheel and you get a calm ride, potent but never crazed responses from the engine and gearbox, and not too much noise from the vast tyres or the suspension that controls them, either.

Twist the button round to Sport and everything steps up a notch, yet still the ride remains composed, even though you become instantly aware that the GTS has become crisper dynamically.

Select Sport +, however, and the throttle response gets a lot keener, the gearbox sharper, downshifting on its own if you brake hard into a corner, while the exhaust note changes dramatically, sounding much louder under acceleration and delivering all sorts of pops and bangs under braking. 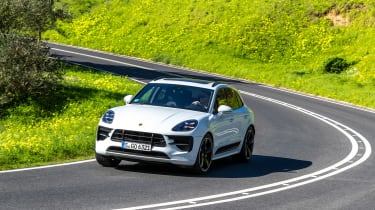 Yet still the ride remains the right side of hard, even though the handling and steering both go up at least a couple of notches in their vivacity. Perhaps the most impressive aspects about the GTS dynamically, however, are the way it steers so cleanly and the way it stops so well considering its near-two ton weight.

Purely to drive, the GTS is in a class of one amongst its more obvious competition, even if it doesn’t have quite the same sense of humour dynamically as the more expensive Alfa Quadrifoglio. Given that Porsche has also further improved the interior design and quality – starting from an already strong place in both areas – it’s hard not to like the GTS, even if you are not a great fan of the sporting SUV in the first place. 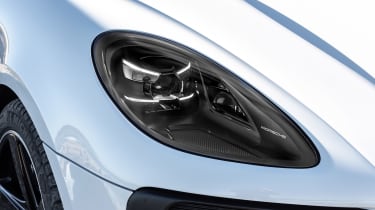 The GTS’s main rivals are the Alfa Romeo Stelvio Quadrifoglio and Mercedes-AMG GLC63, both of which cost more and aren’t as impressive to drive, or merely to be in. The recently revised BMW X6M is also significantly more expensive but also not as much fun to drive as the Macan GTS. All in all, a series of small steps forwards has ensured the GTS remains the most desirable of all the sporting middle-size SUVs, and it has a surprisingly competitive price to match.