Transformed into the car it always should have been, the reworked M4 is the pick of the coupe bunch 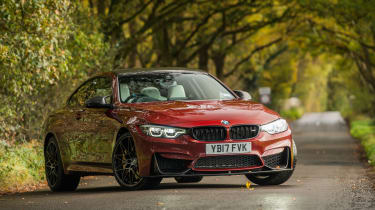 The M3’s changed over the years, so much so that it’s now an M4. From the iconic E30 that’s still mourned for its delectable drive through two straight-sixes, a glorious V8 and now back to a ’six but with (whisper it) a brace of turbochargers the M3 has often hit the sweet spot but has also occasionally been somewhat wide of the mark.

And initially the M4 fell into that latter category. It wasn’t a lack of power that was the problem – with 425bhp and 406lb ft of torque it was scorchingly quick – but its chassis could easily be overwhelmed by the savage torque delivery making it a handful, especially in the wet. However, thanks to a series of updates from BMW and a Competition Package all that’s changed.

Comp Pack cars have an additional 19bhp – not that it was desperately needed – but it was the adoption of stiffer springs, recalibrated adaptive dampers, a remapped limited-slip differential and 20-inch alloys that has made such a difference to the way the M4 drives. From wayward wild child to a beautifully judged sporting coupe, the M4’s transformation has been nothing short of miraculous, being so much more predictable and progressive than before. 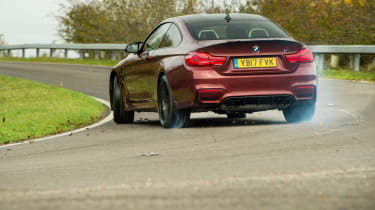 The steering has plenty of weight to it and while it might still lack that final nuance of feedback it’s precise and hooked up to a front axle that now bites with real conviction. There’s far more confidence to be had in the front end now and when combined with a slightly less aggressive power delivery and a rear end that’s significantly more predictable it allows you to adjust your line with the throttle.

The revised damping works a treat and while its ride is firm at low speed it’s not uncomfortable, while at higher speeds there’s more control with the M4 no longer being upset by dips and crests. And of course you can still choose from a myriad of settings for the power delivery, suspension, steering and gearbox to find your perfect set up.

In short, BMW has transformed the M4 from ugly duckling to swan with the latest Competition Package. It comprehensively beat the Audi RS5 and Mercedes-AMG C63 S in our Supertest (evo 241) and is now good enough to be mentioned in the same breath as the iconic E30 M3.

Audi RS5: for its thrust, quality of its damping, quattro four-wheel drive and impressive refinement.