A saloon with the passion and performance of a supercar: the Quadrifoglio completes a stunning double for Alfa 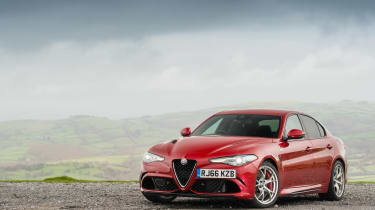 In a world where cars are perhaps becoming somewhat anodyne it’s rather wonderful that we have a contender for the title of best supersaloon that doesn’t hail from Germany. We’ve not had an Alfa that’s been this good since the Alfasud was a lad and the fact that the Giulia Quadrifoglio is not just a contender but a winner was not what we were expecting from this upstart supersaloon.

In a market sector that can so often be dominated by blistered arches and huge cooling intakes the Alfa’s subtle styling is a pleasant departure but the materials used are right up there with the best with a carbon bonnet, boot and roof and aluminium wings and door skins. Its interior is also a refreshing change from the market norm – slightly quirky but not the ergonomic nightmare of years gone by.

> Click here for our supertest between the Giulia's three coupe rivals

Alfa has always been good at engines and while this latest 2.9-litre twin-turbocharged unit isn’t as tuneful as the legendary Busso V6 it still delivers the goods – 503bhp and a sub-four second 0-62mph time see to that. With a slick eight-speed auto it’s an excellent combination. 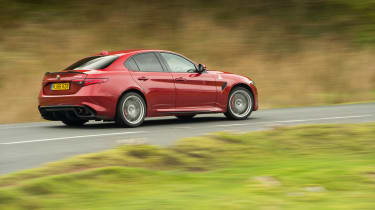 But what really separates the Giulia from its rivals is the fluidity of its chassis. In a class where strong and stable usually equates to stiff the Quadrifoglio has a supple, tactile nature. Like the majority of its rivals the Alfa has different modes to choose from but it’s more straightforward than the over-complicated German models and in all modes other than ‘Race’ on bumpy roads it’s perfectly judged.

The steering’s a revelation, too. Initially it seems overly light and too direct but you soon appreciate its directness and its communicative nature. A gentle flick of the wrists is usually all that’s needed to alter your line or tweak a corner-exit trajectory. There’s plenty of grip too, with impressive front-end bite and excellent rear-wheel drive traction. Even with the traction control fully switched off it’s never wayward and allows you to explore its limits without it becoming a white-knuckled affair.

There have been Alfas in the past that seemed to have all the right ingredients but which haven’t quite gelled together properly but with the Quadrifoglio they’ve been expertly blended to produce a supersaloon with the soul of a supercar. Watch out BMW, Audi, Mercedes… there’s a new kid on the block and it’s just given you a bloody nose.

Mercedes-AMG E63: for its masterpiece of a V8, all-round talent and four-wheel drive oversteer.