Nearly new MG Metro 6R4 heads to auction, it’s been a quiet life for this near-pristine example of Group B history 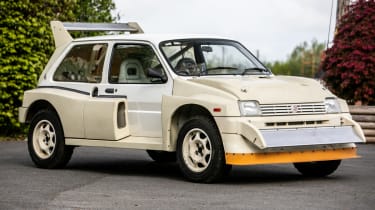 Just 200 Metro 6R4s were made, and this is number 189, but while most have seen some kind of competition over the years, be it rallying or the post-Group B era of rallycross, this particular car somehow avoided all that.

> Click here for our drive of the MG Metro 6R4

The car was apparently bought by an enthusiast in December 1986 - only days before Group B was banned - and transported directly to his Oxfordshire home, where it sat in its delivery state for many years, even wearing the original coat of wax. 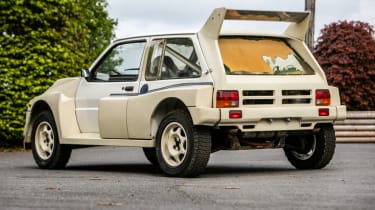 A decade later the car moved to the Donington Museum, where it stayed for another seven years before being bought by the current vendor. At the time it had only five miles on the clock, and since 2002 its owner has covered just another two. Neither of which have actually been in motion, instead running the engine and drivetrain with the car raised on stands.

So original is the car that the bolt-on panels such as the side pods and wings are still unpainted, and the photos also show the seats wearing covers. Despite this, some areas of the car seem to have become remarkably dirty during those seven miles and 33 years, and notably there appear to be small rusty patches. If a cocooned seven-mile timewarp 6R4 can get rusty it’s no wonder barely any regular Metros from the era survive… 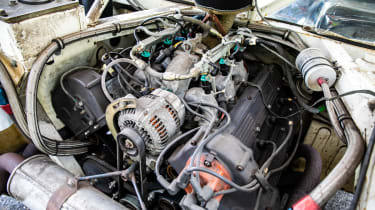 The car comes with the original Assembly Manual, all the purchase correspondence, as well as photographs and letters from the original owner to the Donington Museum. Silverstone Auctions suggests the car could be prepared for rallies or rallycross, though it’s worth noting the cost of bringing essentially a static exhibit up to suitable condition for hard running could be very high indeed.

Still, with an estimate of £200,000-£240,000, the eventual buyer may well have the means. It’d certainly be preferable to placing it on a plinth to perhaps accumulate another seven miles over the next three decades.