It might not have a particularly catchy name, but the SLS-based hypercar offers a unique proposition 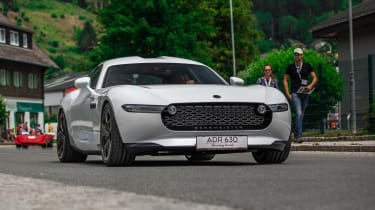 Announcements of electrified hypercars with four-figure power outputs are becoming rather tedious these days, but Austro Daimler has taken somewhat of a different approach to the brief, dropping a Mercedes-AMG six-cylinder into an SLS chassis for a 1198bhp, gull wing hybrid model.

Though you might not have heard of the brand, Austro Daimler has been around for quite some time, coming to fruition in 1899 and producing the world’s fastest car 11 years later in 1910 with the 85mph Prinz Heinrich. The ADR 630 pays homage to the Bergmeister of 1931, a model renowned for its success in mountain races and the last vehicle the company produced until today.

Making its UK debut at Salon Privé in September, the model doesn’t hide its SLS origins, with the signature long bonnet, short rear overhang and gull wing doors all making an appearance. Impressively, even with the addition of a hefty hybrid powertrain, the model has gained just 31kg in weight over a standard SLS coupe, largely thanks to a lightweight aluminium space frame. 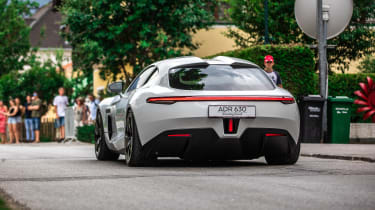 Under the skin of the ADR 630 sits a plug-in hybrid powertrain, consisting of three electric motors and the 3-litre Mercedes-Benz M256 six-cylinder engine used in Affalterbach’s 53 AMG range. Each of the three electric motors produces 271bhp, meaning a total of 813bhp comes from the motors alone – the engine produces 385bhp. That makes for a total output of 1198bhp and 1180lb ft, good for a 2.5sec 0-62mph time and a top speed of over 200mph.

What makes the model unique is its ability to travel 150 miles on pure electric power and over 600 with the use of the combustion engine. Though pure electric cars are becoming commonplace, range for many production models is still yet to exceed that of combustion alternatives, making the prospect less appealing to some. Thanks to the electric motor-biased hybrid system in the ADR 630, however, both better range than most combustion cars and the performance benefits associated with electric motors are achieved.

The 55kW Li-ion battery behind it all sits in the boot, meaning there’s not much in the way of storage for long trips. What you lose in practicality, though, you gain in luxury, as inside you’ll find open-pore wood, milled-aluminium details and a new digital dash, bringing it up to speed with the models of today.

Pricing is yet to be revealed, but if you’d like to see it in the flesh, head to Salon Privé at the start of September.