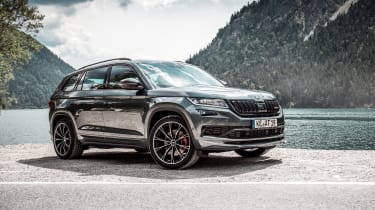 Following shortly behind the brand’s efforts with the Octavia vRS saloon, Abt Sportsline has turned its attention to Skoda’s largest offering, the Kodiaq SUV. Though fettling such a model for performance would usually be questionable, the vRS variant holds the fastest time for a seven-seat SUV around the Nürburgring – a pointless title, perhaps, but one that demonstrates its ability nonetheless.

Under the bonnet, the model’s twin-turbocharged four-cylinder diesel power plant, a unit also found in the Volkswagen Tiguan, is turned up from 236bhp and 369lb ft of torque to 266bhp and 398lb ft (up 29bhp and 29lb ft), with power sent to the ground through a seven-speed DSG gearbox, fitted as standard in all vRS Kodiaqs. This power bump translates to a 0.2sec improvement in 0-62mph time, bringing the number down to a respectable 6.8sec, despite its 1805kg kerb weight. No improvement on top speed is quoted, so it likely retains the 136mph factory figure.

Not only has the addition of a new ECU helped improve power output, but Abt suspension springs reduce the ride height for a lower centre of gravity, as well as offering a more aggressive stance. A welcome break from most models we see from the tuner, the Kodiaq doesn’t see the addition of supposed aero-enhancing plastic, but instead, subtle 20-inch Abt diamond-cut wheels to set it apart from an ordinary Kodiaq. 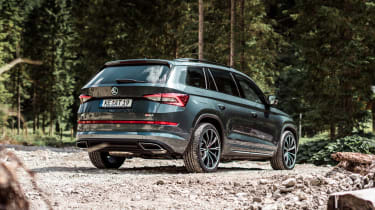 Sadly, the brand hasn’t re-tested the fettled version on the Green Hell, but we’d put money on it being at least a few seconds quicker than the standard version, breaking well clear of the 9min 30sec mark.

Pricing and availability for the upgrades haven’t been announced, but a standard Kodiaq vRS will set you back just under £43,000.