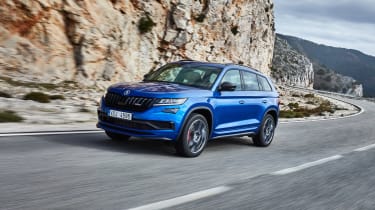 Skoda’s vRS range has expanded, and not in the way you might expect. Rather than a Fabia vRS, or even better, a Citigo equivalent of the VW Up GTI, it’s the larger Kodiaq that joins the Octavia vRS in Skoda’s performance portfolio.

Yep, it’s another performance SUV. A diesel one at that, Skoda reasoning that diesel still rules in this market segment even if it’s dropping off elsewhere, and it has the potential for easy-going performance and reasonable economy, which should fit well with the Kodiaq’s intended market.

The vRS has now gone on sale with deliveries starting in the spring. Whether customers will see the £42,870 asking price for the Kodiaq vRS as worth the outlay isn't clear - but given the enduring popularity of SUVs, there’s probably no better time for Skoda to join the fray than now. 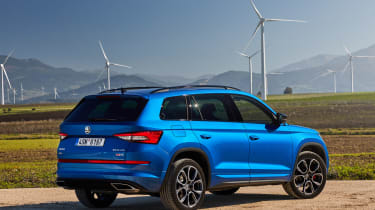 The Volkswagen Group has powerful V6 diesels in its portfolio, but Skoda has instead stuck to two litres and four cylinders for the vRS’s engine, albeit boosted by a pair of turbochargers rather than a single unit.

It's a power unit that can also be found in VW's own Tiguan, where it develops the same maximum output of 236bhp at 4000rpm, and a more telling 369lb ft of torque, developed between 1750-2500rpm. It has to work against a minimum kerbweight of 1805kg, but still manages to haul itself to 60mph in 6.8sec and 62mph in 7sec, with seven-seat variants a tenth slower. Top speed is 136mph regardless of seating layout.

You won’t find a manual option on the specification list however, the sole option a seven-speed DSG operable with steering wheel paddles. Drive is sent to all four wheels, the system able to send up to 85 per cent of the engine’s torque to an individual wheel in extreme circumstances. Both axles are controlled by electronic locking differentials.

Concerningly there’s little on the vRS that you won’t also find on the Sportline that sits below it in the Kodiaq range, other than the more powerful drivetrain.

Dynamic Chassis Control and Progressive Steering are both available in other Kodiaqs, and when pressed Skoda’s engineers revealed only that the damping in sport mode is slightly different for the vRS. The ESC is less restrictive in Sport too, though the relevance of that on a diesel SUV is up for debate. 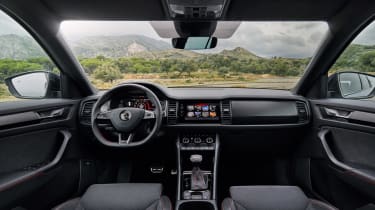 There’s a curious kind of entertainment to be had from driving an SUV quickly, in that their inherent dynamic handicaps - weight and centre of gravity - can sometimes make them more expressive than the tied-down saloon cars from which they’re derived.

The Kodiaq vRS is like this too, but only to a degree. Skoda is perhaps a bit too sensible to give it the feel of a road-legal Dakar truck, so instead it’s more like the elevated Octavia vRS Estate you’re expecting.

And that’s fine, but the Octavia itself is undoubtedly a car that impresses more with the prolonged exposure of ownership than it does on a B-road thrash, and the Kodiaq’s extra weight and larger frame don’t really help the SUV diverge from that. This is a car that hangs on well, rides maturely, steers accurately and has pretty good body control for its size, but doesn’t really engage you in the process. 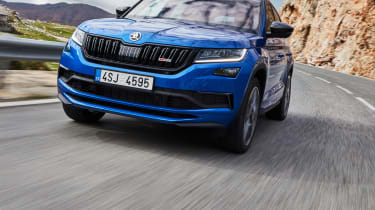 Thus you fall back on the more cerebral entertainment of being able to pedal something quite large and heavy at a surprising rate without the car really breaking a sweat. The diesel engine undoubtedly helps here, providing a hearty surge of performance without much intrusive noise from the engine bay nor effort from the driver.

There’s no getting away from its four-cylinder nature - one of those VW Group V6s would sound better and perform with more flair - but the electronically-enhanced growling in the background when you select Sport mode isn’t unpleasant. The DSG works well here too, responding swiftly to clicks of the slightly disappointing plastic paddles, and otherwise changing up and kicking down smoothly regardless of driving mode.

And so we come back to that £42,870 figure, and wonder whether the vRS offers enough over a Kodiaq Sportline with the 187bhp TDI at £37,450 to justify either the extra money or the vRS billing.

The vRS is, admittedly, a reasonable chunk quicker, knocking almost two seconds off the Sportline’s 0-62mph time. And equipment levels are high, even if much of it isn't unique to the vRS: you get standard Dynamic Chassis Control, Virtual Cockpit (with a sport setting unique to the car with a central speedometer), 20in "Extreme" alloy wheels, red-painted brake calipers, and a dynamic sound booster. 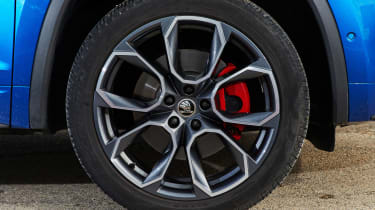 The Kodiaq vRS would doubtless be a satisfying car to own, and some families will appreciate the occasional third-row seats and higher seating position the car offers, as they would with any Kodiaq. But as is often the case, we’d be inclined to save some money and enjoy similar levels of practicality in a more conventional car - in this case, the £12k cheaper and hugely talented Octavia vRS 4x4 estate.