UK-based tuner is first to get its hands on the all-new Supra, adding even more power and better handling 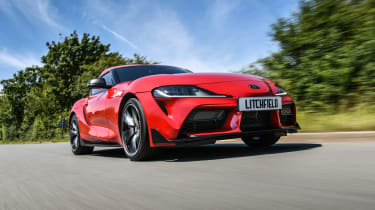 The A80 Toyota Supra of the ’90s was a car famous for its ability to be tuned to levels that concerned even the most accomplished supercars, its 2JZ power plant frequently breaking the 1000bhp threshold without any hiccups. Now the new Supra’s on our roads, it was only a matter of time before a tuner got its hands on one. Enter Litchfield.

Best known for its work on Nissan GT-Rs, Litchfield is a UK-based tuning company that has expanded its work to the likes of Porsche, Alpine and now, Toyota with the new Supra. Having already worked on its BMW-derived B58 six-cylinder power plant, unlocking its potential didn’t take much time.

From the factory, the A90 Supra produces a quoted 335bhp and 365lb ft of torque, but with the addition of Litchfield’s tune and a more free-flowing exhaust system (either Milltek or Akrapovič), it’s now producing ‘well over’ 420bhp and 440lb ft – the brand does admit that the factory figures may be a little underrated, though, as on Litchfield’s dyno a stock car produces 370bhp and 390lb ft. Knowing Litchfield and the capabilities of the B58, there’s likely even more power to come... 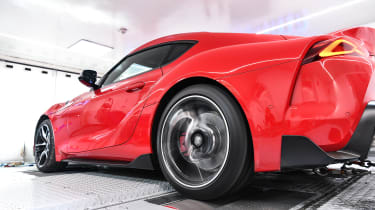 The tuner hasn’t stopped there. If you’d like to ensure longevity and avoid any potential heat issues, you can opt for an uprated oil cooler, Litchfield Charge Cooler Radiator and a heat-shielded induction package for optimal airflow. Also in the works are a Litchfield strut brace for more rigidity, bespoke lowering springs with coiler solutions from KW and Bilstein, and even an enhanced caster bush for more refined steering.

No modified car would be complete without some fibre in its diet, so Litchfield is offering carbonfibre lips front and rear, vent trim pieces and, in the future, more cooling ducts in the bonnet to extract heat from the now-fettled turbocharged six.

Pricing and availability is yet to be announced, but the tuner has confirmed that any work carried out on its Tewkesbury premises will be under warranty, as with all of its Nissan GT-R packages.