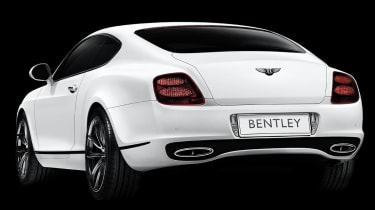 Bentley’s most powerful car yet is gracing Geneva – and it runs on biofuel. The Continental Supersports is the company’s first FlexFuel car, and is apparently the beginning of Bentley’s environmental commitment.

How sincere that commitment is remains to be seen – the Supersports tag doesn’t exactly mark this out as a green special edition, with 17.3mpg and 388g/km of carbon emissions not rivaling the Toyota Prius anytime soon.

Instead the W12 engine’s 621bhp, and 590lb make this the most potent road-going Bentley. The sprint to 60mph is done in true supercar fashion too, at a mere 3.9sec, while the top speed is 204mph.

More sporting tweaks include a 110kg weight drop over the Continental GT Speed (losing the rear seats being one of the big cuts), a revised Quickshift transmission and uprated, stiffer suspension. The four-wheel-drive system also gets a new 40/60 rear-biased torque split to boost acceleration out of corners.

The Supersports started as an under the radar project, with a small handful of engineers keen to explore the potential of a pokier and lighter Conti. As the project gathered momentum it became more official with a final design brief to make the car ‘extreme’.

For the full in-depth story on the new Bentley Continental Supersports, get Issue 129 of evo, out on Weds March 4. Come back to evo.co.uk from March 3 for live coverage from the Geneva motor show.