Can the extraordinarily capable and sumptuous Continental GT topple the incisive Ferrari 599 GTB Fiorano as the world's greatest GT? 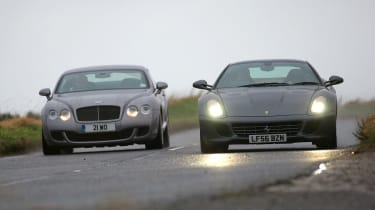 No contest. That’s what I was thinking, ten minutes into a three-hour, late-night drive to the rendezvous point with the Ferrari. But a couple of hours later I’d changed my mind. It’s not that the qualities of the Bentley creep up on you, more that you learn how to drive it.

On the face of it, there’s not much to learn. No handling traits to get the hang of; it feels like a big front-driver, so it’s as benign a 600bhp car as you could imagine. Press the throttle and it goes very fast, with no traction issues, wet or dry, thanks to four-wheel drive, and there’s no hefty gearchange to finesse because it’s a smooth auto. And yet over familiar roads I didn’t feel comfortably in charge.

Inertia is what you have to get to grips with. In the regular Conti GT you have to make allowances for the weight when you start to press on, and the extra power and torque of the Speed seem to magnify the issue and demand even greater awareness and concentration. The enormous carbon-ceramic brakes I’d admired before setting off were responsive in a check-braking situation but, oddly, they seemed lacking in bite when used harder. Fortunately there was plenty of motorway time to consider all of this before another stint of A- and B-road hacking to the final destination.

These dark, damp and unfamiliar roads and a more positive, pro-active approach changed my view. I set the damping to firm and whereas before I’d let the gearbox do its own thing, I was now using the paddles to sharpen throttle response and help rein-in speed on the overrun. Firmer steering inputs reveal more bite than you’d imagine and a keenness to turn you’d think was beyond a 2350kg car with 12 cylinders ahead of its front wheels. Meanwhile the traction out of these wet corners and tricky little roundabouts is astonishing.

It may be a very different car to the 599 that’s already parked outside the hotel, but by golly, this heavyweight is a contender. Whether it can go the distance we’ll discover in the morning…

Although the Ferrari is the same grey as the clouds sheening everything with a light drizzle, its effect is magical – it makes the bluff Conti invisible. Sharp and distinctive even in its most subtle colour, the toned, sculpted form of the 599 is a magnet for attention.

Both these GTs have 12 cylinders, 6 litres and 600bhp, give or take, but that’s about all they have in common. While the Bentley is at the practical end of the GT spectrum, the Ferrari is at the other, where GT blurs into supercar. Although front-engined, the 599’s masses are configured to replicate, as far as possible, those of a mid-engined car; as much of its V12 as possible is mounted behind the front axle line and its gearbox is in unit with the rear axle to concentrate more weight rearwards. There are only two seats but they are generously cut, firm and supportive like the Bentley’s, and you sit low in an airy cockpit. There is neatly stitched leather and glossy carbonfibre but it doesn’t have the design crispness and cohesion of the Bentley, nor its no-expense-spared, perfectly tailored feel. Mind, nothing else does…

Thumb the starter button and, like the Bentley, the Ferrari bursts into life with a rumbling, resonant idle that is quickly muted as the exhaust valving shifts to ‘discreet’. Tug on a paddle, pull away, and almost instantly there’s a feeling of rightness, a sense of connection that is almost startling after the Conti. The steering is alive in your hands and the moment you squeeze the throttle and rouse the V12, you know that it’s driving the rear wheels and that the engine and chassis are minutely responsive.

The low-speed ride is firm, but only fractionally more so than the Bentley’s, and consistent with the overall feel – the 599 is direct, precise and alive. What gives the Conti a glimmer of hope is the 599’s surprising lack of traction. The roads are still cold and wet and the manettino is set just one notch up from the snowflake position but even in low-speed turns with small throttle openings the stability/traction control is busy. The slickness of the surface is clearly relayed through the steering but you’d expect the rear tyres to find more bite. Happily, on faster A-roads with a bit more throttle and rearward weight transfer, they do.

You can’t nail the throttle with impunity as you can in the Bentley but as the miles build and you get a feel for how much grip there is, the chunky rump of the Conti begins to gain less yardage out of roundabouts. The Ferrari makes its power at much higher revs and is a good 100lb ft down, but it also weighs a substantial 500-plus kilos less, which evens things up, and once into its stride has no trouble reeling in the wrung-out Conti. More satisfying than that, it has a consistency of steering weight and response that makes the Bentley’s seem numb and artificially hefty, a throttle that feels directly connected to the rear wheels, allowing delicate adjustment of the handling balance, and brake feel and power that inspire you to drive with a calm precision. The presence of stability control is reassuring, no question, but if you’re brave enough to twist the manettino all the way to the top to disable it, you’ll find that the 599 is beautifully poised, tidy and throttle-steerable through a wet second-gear corner.

The speed of the Bentley through the same corner is remarkable. You can feel the mass giving the brakes a hard time on the approach but almost as soon as you’ve turned in you can get back on the throttle. The four-wheel drive distributes the turbocharged surge so ably that the Conti sling-shots out of the turn with just a hint of understeer.

The Conti GT Speed is extraordinarily capable, with stupendous performance and sumptuous accommodation, but dynamically it’s a car that amazes rather than inspires. It’s a beautifully crafted, silver-plated mallet that hammers the road into submission, the Ferrari a paring knife; more wieldy and sharper, an instrument for dissecting a road, cutting from apex to apex with speed, accuracy and a greater economy of effort. The 599 is also a great long-distance car, only the curious, hollow-sounding noisiness of its ride over difficult surfaces detracting from its comfort compared with the Bentley. It will be a very special car that topples it from its position as the world’s greatest GT.