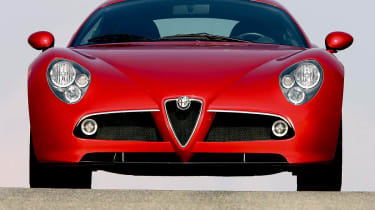 Alfa Romeo has confirmed what evo predicted in issue 091, namely that the 8C Competizione, which started life as a concept car for the 2003 Frankfurt motor show, is to become a road-going reality. Production starts later this year on a limited run of 500 cars, and the price will be 160,000 Euros plus local taxes (about £128,000 in the UK at today's rates).

Despite earlier denials that the 8C had a production future, Alfa has obviously been working hard on the super-coupe's development in preparation for its Paris show debut. The work was undertaken in conjunction with Maserati. The two companies will share the 8C’s 4.7-litre 444bhp V8 engine – it will also go into the new Maserati Coupe, due to be launched at the Geneva motor show next March – and the Alfa will be built on the same production line as the Maserati Coupe and Quattroporte. (The facility was recently reconfigured to allow three separate models to be made on the same line.)

The production version of the 8C stays remarkably faithful to the concept, both in the way that it looks and the way it’s engineered, suggesting there was never really any doubt that the flagship model would be built. Designed by the Alfa Romeo Style Centre, the 8C’s sleek, curvaceous lines remain unsullied by wings and spoilers, high-speed stability being taken care of by ‘ground effect’ aerodynamics that achieve negative lift. As with the concept car, the production 8C features a steel spaceframe chassis supporting carbonfibre body panels.

The longitudinally mounted all-alloy 90degree V8 sits a long way back in the chassis to create a front-mid-engined effect, while a transaxle – a traditional Alfa feature from the days when many of its models were rear-drive – also helps even-out the weight distribution. The engine produces 444bhp at 7000rpm and 347lb ft at 4750rpm, 80 per cent of the latter available from 2000rpm upwards.

The six-speed gearbox features the latest iteration of Maserati’s Cambiocorsa paddle-shift system, with a variety of modes from full (clutch pedal-less) manual to full automatic operation. To keep things in check at the back there’s a limited-slip differential that works in tandem with an electronic stability and traction control system. Wheels are massive 20-inchers, fashioned from fluid-moulded aluminium for lightness, wearing 245/30 profile tyres up front and 285/35s at the rear.

Exposed carbonfibre makes an appearance in the two-seater 8C’s cabin on the facia, trim panels and seat shells, the latter being custom-moulded to fit the owner.

The 8C Competizione’s name is a nod to classic Alfas. The 8C code was used on Alfa road and race cars of the 1930s and '40s powered by the innovative V8 engine created by Vittorio Jano, while Competizione is in homage to the 6C 2500 Competizione driven by Fangio and Zanardi in the 1950 Mille Miglia.

Alfa’s last limited-run special was the SZ, admired for its dynamics but oft mocked for its challenging looks; it was no sales success but has since become a cult classic. Alfa will be hoping that the 8C can achieve that cult status from launch; the car’s price takes it into direct rivalry with Aston Martin and Ferrari, so it’s likely to need any assistance it can get.