It's an Alfa like no other, and not just because it’s built by Maserati… 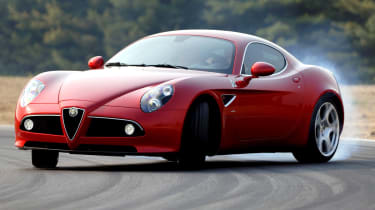 Imagine SEAT developing and launching a £110,000 supercar, or picture a 450bhp carbonfibre coupe nestling alongside a Clio 197 in a Renault showroom. It just wouldn’t work. Nobody would stroll past their Porsche or Aston dealership and slap down a six-figure cheque for a car built by such mainstream manufacturers. Somehow though, Alfa Romeo – purveyor of some true abominations over the years, let’s not forget – still has the magic to sell-out its production run for the 8C Competizione more than twice over in the space of 14 days.

That’s exactly what happened at the Paris Auto Salon in 2006, where the production version of the 8C was shown for the first time, where over 1200 customers put their names in the order book. As you read this, the first of the 500 chosen ones will be receiving their 8C. It’s a special car all right…

You only have to look at the 8C to understand why it’s worth every penny of £111,000 to those 500 individuals. It’s a stunning shape. I know these things are subjective, but I’ve yet to meet anyone who doesn’t go slightly weak-kneed when you mention the 8C. And in the glorious carbon, with sun glistening down its flanks and rolling across its sweeping bonnet, any niggling doubts that it treads dangerously close to pastiche are rendered utterly ridiculous. It’s jaw-dropping.

It gets better when you hear the 4.7-litre V8, too. The way it snaps into life with a sharp stab of revs and settles to a bassy, dense idle is reminiscent of a Vanquish. Despite being four cylinders down on the Aston it actually sounds even fiercer – the tight howl a million miles away from the mellow, easy-going note you often associate with V8s. Prod the throttle and the engine snarls as the revs soar, then the exhausts pop and bang as they die away. Maybe that ‘Competizione’ tag isn’t just a sop to the marketing department.

So what is the 8C? Well, in essence it’s a bitza. But it’s a bitza of undeniably noble stock. The engine is similar to that of the Maserati Quattroporte/GranTurismo (meaning it’s built at the Ferrari factory), but it’s been bored and stroked to 4.7 litres and punches out 450bhp at 7000rpm. Expect to see it in future Maseratis, and perhaps the new ‘baby’ front-engined V8 Ferrari. The engine drives through a six-speed paddleshift transaxle ’box (the engine is behind the front axle, the box just ahead of the rear axle, thus concentrating all the masses within the wheelbase). The double-wishbone suspension shares its basic architecture with the Quattroporte (although the 8C is much shorter in wheelbase), but with 8C-specific bushes, geometry and springs and dampers. Interestingly, Alfa chose to ditch the ‘Skyhook’ adaptive dampers to give the 8C a more ‘mechanical’ feel.

The structure itself is made up of a steel central floor section with stressed carbonfibre bonded to the metal to make up the passenger cell. Steel subframes at the front and rear support the engine, ’box and suspension. The body panels are also carbonfibre, helping keep the 8C’s weight down to 1585kg. Not exactly a flyweight, but impressive considering the (admittedly larger) Maserati GranTurismo is a whopping 1880kg. It must be a bit galling for the Modenese manufacturer, which actually builds the 8C alongside its own, less exotically constructed range.

So it’s an Alfa in name, and in the sense that it was designed at Alfa Centro Stile in Arese and honed by Alfa’s own chassis engineers on their own test tracks and at the Nürburgring. However, its engine is built by Ferrari (good), and it’s pieced together by Maserati (not so good, although much better than it used to be). Confused? Don’t be, for what counts is that it’s a fully resolved and painfully desirable coupe…

Swing open the carbon-skinned door and you’re treated to a cabin that pushes all the buttons that an Italian coupe should. It’s clean and stylish, uses the finest materials (carbonfibre and aluminium) and has lavish, indulgent details wherever you look. You don’t really drink all this in – the pull is too great – and before you know it you’re sitting in the carbon-shelled seat, pressing the starter button and firing the big V8 into life. Sitting here behind that gorgeous carbon-topped three-spoke steering wheel, the view ahead framed by the curve of the voluptuous wings, the 4.7-litre V8’s impatient idle gently fizzing through the seat, the 8C Competizione feels truly unique.

Hit the ‘Sport’ button, opening baffles in the exhaust so you can hear the V8 even better, sharpening throttle response and giving you total responsibility for gearshifts (in the default mode the ’box will execute upshifts when you hit the limiter) and the 8C is primed and ready.

The steering feels heavy, a little sticky, perhaps. Immediately you sense it’s not going to be a writhing, communicative instrument to help tease the 8C up to its limits. The ride is plain hard, distancing the Alfa from the Maserati GranTurismo, or indeed an Audi R8. The 8C feels like it’s set up for ultimate body control rather than a supple and subtle ride. I’m heartened by this – the 8C is a compact (think Aston V8 Vantage), two-seater sports car and it feels like it. I’m sure it’d cross continents easily enough, but first impressions suggest it’s no fuzzy-edged GT.

The automated manual ’box works smoothly enough, but driving the 8C just a couple of days after the Ferrari 430 Scuderia at eCoty, I can’t help being a little disappointed by the speed (or lack thereof) of the gearshifts. In ‘Sport’ mode the shift time is 0.2sec, compared with 60 milliseconds (0.06sec!) for the Scuderia. Nevertheless, the ’box certainly doesn’t spoil the 8C experience and the paddle-shift system adds to the sense that the 8C is a hardcore drivers’ car.

We’re only permitted to drive the 8C on Alfa’s Balocco test track, which should suit the 8C perfectly. It’s quite narrow but very smooth, although with lots of tricky transitions and fast-entry, slow-exit corners, Balocco is a stern test of any car’s composure and traction. On the initial sighting laps the 8C feels terrific: the front end is responsive and the steering quick and accurate – despite a lack of genuine feel. Traction through the 8C-specific 285/35 ZR20 P Zero rubber is strong, and the big V8 feels superb, punching hard at low revs and building into an intense rush as the needle pushes towards the 7500rpm cut-out.

The delivery isn’t explosive and you’d need a peachy launch (and maybe a downhill slope) to match Alfa’s 4.2sec claim for the 0-62mph benchmark, but the 8C has long legs and it’s easy to believe the claimed 181mph top speed (in tests at Nardo it actually reached 186mph). However, all is not quite as the hard-ride and wonderfully rorty exhaust would have you believe. Push harder and the body control starts to unravel, body- roll building quite rapidly and getting more exaggerated as each curve unfolds.

Switch off the DSC (which is quite tolerant in ‘Sport’, though I never found it willing to allow mild oversteer slides as Alfa insisted it would) and you start to uncover more surprises. There’s quite a lot of turn-in understeer, which builds progressively as you steer towards the apex. Stay on the power and as the corner opens out the balance shifts and the rear tyres point the front back onto your chosen line and then edge wide, requiring decisive correction. It’s fun, but there isn’t quite the mechanical grip you expect and the body-roll is frustrating – especially when you consider the unyielding ride quality.

This isn’t to say the 8C isn’t capable; it just demands you adapt your style to suit. Wipe off a bit more speed before a corner, turn in within the limits of the grip, let the car settle on its springs and then start to load up the rear tyres with torque. Now there is no understeer and you can sense the rear tyres just starting to break away. Measure the throttle accurately and you can dance the 8C right on the edge of adhesion, rear just edging wide but requiring no correction, a bit of wheelspin keeping the engine right in the sweet- spot as you hit the next straight.

You can play the hooligan, of course. Adopt the slow-in technique and then get a bit brutal with the throttle and the tail quickly swings wide. It’s easy to hold there thanks to the V8’s broad power- band and the way thumping torque melds seamlessly into big horsepower. Trying to gather up the slide isn’t quite so easy, though. It’s that body-roll that’s the problem again, the stored-up inertia meaning most slides end with a slightly clumsy bobble as the suspension takes a few fractions to prop the body upright again.

So the 8C Competizione isn’t the dynamic match of the freakishly talented Audi R8. And despite its fast road/racetrack focus it’s nowhere near as tactile, controlled or grippy as a GT3. But it’s still an intoxicating car. It feels like an Aston V8 Vantage rival and is even more special to be around. It’s more expensive, but undeniably more exclusive (although there will be a further 500 Spyder versions built), has the performance edge and is probably marginally the more exciting drive. If Alfa could tie the body down a bit more securely and find a way to beef up the impressive-looking but fade-prone brakes, the 8C Competizione would be even better. But even with some dynamic foibles it’s still a mighty desirable coupe.

It could even go racing in the GT3 category next year. Wonder if they’ll build an 8C Competizione RS… 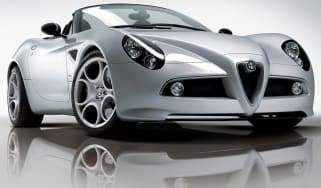 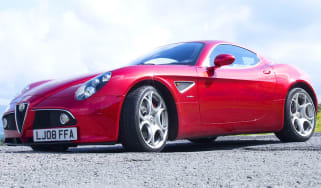 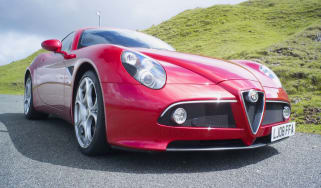 We drive one of the very first 8C Competiziones in the UK, and find out how Prodrive has transformed the Brera
Alfa Romeo 8C Spider 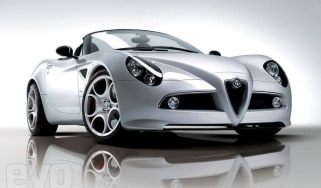 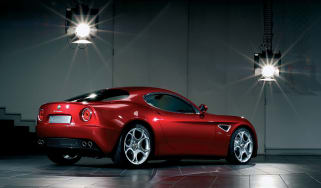 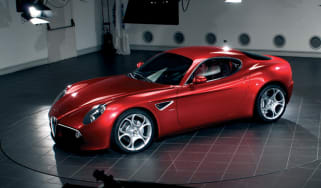 Alfa has turned its stunning 8C concept into a production reality. This is what 500 lucky buyers will get
Alfa 8C Competizione 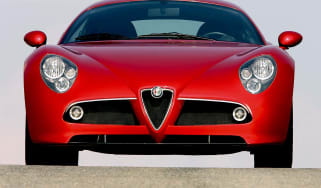 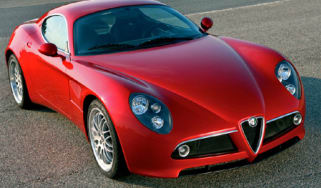 8C Competizione to become a limited-run production model in 2007
Alfa Romeo 8C back on! 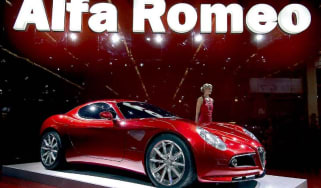 Alfa Romeo 8C back on! 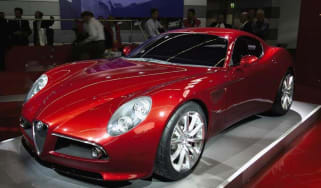