Alfa has turned its stunning 8C concept into a production reality. This is what 500 lucky buyers will get 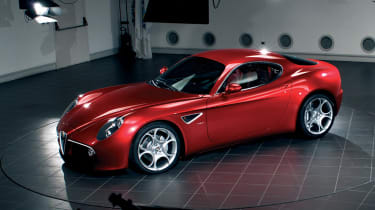 In every sense of the word, you have to admire Alfa’s. When the company unwrapped the achingly beautiful 8C Competizione concept at the 2003 Frankfurt show, the world sighed at the sensual beauty of the design and then sighed again with the realisation that, things being what they were at parent company Fiat (seriously focused on paying the electricity bill at the time), this was one exotic two-seater coupe destined to remain a tantalising fantasy.

Not everyone saw things that way. As Fiat began to inch its way back from the edge of the abyss, the 8C enthusiasts at Alfa (roughly everyone) managed to find ways to keep the life-support machinery ticking over. In March 2004 the 8C was rolled out again at Geneva, this time with a plausible interior. Then, in September 2005, Antonio Baravalle became Alfa’s new CEO, and that’s when the 8C’s obvious potential as a power for good began to dictate its production fate.

Baravalle was a fan of the project, just like his predecessor, Karl-Heinz Kalbfell, who until the summer of 2006 also ran Maserati. The continuity of the Maserati connection, which provided the building blocks for the 8C in the first place, was crucial. But where Kalbfell struggled to pull in the funding to move things on, Baravalle came up with a rather more radical proposal. He elected to slash Alfa’s advertising budget and spend the money putting the 8C into limited production instead. Fiat’s president, Sergio Marchionne, reportedly said: ‘If the figures add up, do it.’ Apparently they did. And at the Paris show last September everyone knew it.

Baravalle describes the move as ‘the perfect way to promote the Alfa brand’. He’s got a point. Like Fiat, Alfa doesn’t have the luxury of time to waste, and cutting to the chase with the 8C might just turn out to be a marketing masterstroke. The company needs, once and for all, to bury the lingering doubts that hang over its ability to deliver truly deft dynamics as consistently as it does drop-dead gorgeous looks.

So although only 500 will be made (and they’ve all been sold), a lot rests on the 8C’s broad and curvaceous shoulders. Mostly a question of credibility. As the company itself admits, its debut in production form at Paris wasn’t so much a new arrival as a point of departure designed to reaffirm Alfa’s place in the world.

With a confirmed price of 136,000 euros plus local taxes (i.e. around £105,000 in the UK), the 8C will doubtless be compared with similarly priced Lambos, Porsches, Ferraris and Astons. Largely academic, of course, as, unless your name is on the list or you want to pay over the odds for a speculative sale, an 8C is unlikely to be parked on your driveway any time soon. Which could turn out to be good news for Maserati, whose new Coupe, which will be unveiled at Geneva in March, shares the 8C’s basic platform, 4.7-litre 444bhp V8 engine and six-speed Cambiocorsa paddle-shift transmission. With the Alfa already sold out, the Maserati might well pick up sales as an attainable, cut-price substitute.

The first customer cars are slated to arrive in the autumn. Japan and Australia will take the majority of 8Cs, though 100 have been earmarked for the States, marking Alfa’s return to the world’s largest car market after an absence of more than a decade.

It’s ironic, in a sense, that the almost impossibly good-looking 8C will be so closely scrutinised for its dynamic talents. Alfa’s last limited-run special, the SZ, handled brilliantly but was widely ridiculed for its aggressively angular and chunky shape. Not by me – I loved the way it looked – but it was never a sales success and its cult status today is largely down to its rarity, head-turning otherworldly oddness and a genuine sense of the exotic for comparatively little cash. The 8C is mixing it in altogether more exalted company but, without turning a wheel, it seems it had all the pulling power it needed back in 2003 at Frankfurt. You can’t argue with a full order book.

It turns out that the man responsible for the glamour (and the resultant clamour) is Wolfgang Egger, the 44-year-old German designer working out of the Alfa Romeo Style Centre based at Alfa’s old Arese factory on the outskirts of Milan. Egger was involved with the styling of the 156, 166 and 147 models and in charge of the 159’s, but the 8C shows what he’s really capable of, and it is undoubtedly his masterpiece.

Elements established by the concept shine out in the finished car. The 8C Competizione is a classic two-seater GT with long bonnet/short tail proportions, taut, compact dimensions and a stunningly clean and uncluttered shape that generates negative lift at speed without the aid of wings or spoilers. All the pillar and glass surfaces and profiles, together with the door-mirror shape and position, have been optimised by mathematical modelling and wind tunnel tests.

Alfa traits that have become familiar in recent years – such as the sharp tapering of the bonnet-lines towards the stylised shield grille, the broad, muscular flanks and the slightly pinched waist – are pulled together in a tour de force that’s just as remarkable for the dynamic impact of the deep furrow that runs back from the front wheelarch, the drop-shaped headlights embedded flush into the front wings, the circular LED tail-lights with their brushed aluminium bezels and the frankly wonderful 20in ‘telephone dial’ alloys fashioned from fluid-moulded aluminium.

The production version of the 8C stays remarkably faithful to the concept, both in the way that it looks and how it’s engineered, though the originally planned carbonfibre-clad tubular-steel spaceframe was eventually dropped in favour of a steel monocoque with carbon body panels to meet pedestrian protection and crash performance requirements. Wind tunnel tests have resulted in a new diffuser, and the concept’s forward-hinged clamshell bonnet has been replaced by a more conventional rear-hinged arrangement, again on safety grounds. Likewise the positioning of the petrol tank, which has been moved forward, thus robbing the area under the glass tailgate of what little stowage space there was there, though the high platform is equipped with a slot into which a dedicated overnight bag fits snugly.

Egger regards the driver as the focal point of the design. ‘When you sit in the car you can see the front of the bonnet, the curve of it. The rounded windscreen creates emotion, too, by fixing the relationship between you, the car and the landscape you drive it through.’ Good, old- fashioned principles, you might think, but Egger is adamant the 8C is not retro. ‘It’s a future design that has the emotions of the cars we had from some years ago – cars like the TZ and 33 Stradale – and ones we may have in the near future.’

The 8C Competizione’s name is a nod to classic Alfas. The 8C code was used on straight-eight-engined Alfa road and race cars in the 1930s and ’40s, while Competizione is a homage to the 6C 2500 Competizione driven by Fangio and Zanardi in the 1950 Mille Miglia.

Although the 8C’s engine is based on the block used by the current Ferrari and Maserati V8s, Baravalle says it will be ‘more like a Ferrari than a Maserati’. That means a flat-plane crankshaft and, presumably, that slightly thin-sounding screaming delivery rather than a mellow throb. The intake and exhaust have been tuned for what Alfa calls ‘a timbre that enhances the car’s character and makes it unmistakable’. The exhaust system also has electronically controlled valves that give full rein to its singing voice without infringing any type-approval or environmental constraints.

The longitudinally mounted, 90 degree all-alloy V8 sits a long way back in the chassis to create a front-mid-engined effect, while a transaxle – a reminder of Alfas when most were rear-drive – also helps even-out the weight distribution. The engine develops 444bhp at 7000rpm and 347lb ft at 4750rpm, with 80 per cent of that torque available from 2000rpm. With a kerb weight of around 1400kg, Alfa anticipates 0-60mph in 4.5sec and a top speed of almost 190mph.

The six-speed gearbox features the latest iteration of Maserati’s Cambiocorsa paddle-shift software. There are five modes: the ‘normal’ and ‘sport’ in both manual and automatic, plus a setting for icy conditions. A limited-slip diff works in tandem with Alfa’s VDC traction and stability control system. Suspension (derived from the Maser Coupe’s) is by double wishbones all round.

Exposed carbonfibre is the composite of choice for the cabin; hardly original but, in this case, very nicely done. It appears on the facia, the trim panels and seat shells, the latter being culled almost wholesale from the Ferrari Enzo. An inspired choice. They’re upholstered in a special ‘breathing’ leather/waxed cotton weave that might just be the sexiest material ever to support a bum and torso.

In fact, the interior looks every bit as soulful as the exterior. The driving position is relaxed, the deeply hooded main dials as big, bold and clear as they are lovely to look at, the switchgear satisfyingly tactile and intuitive, the steering wheel positively sensual, the detailing exquisite. I can’t imagine anyone wanting to change any of it, but Alfa says a fair degree of customisation is possible to accommodate individual tastes and colour preferences. There are just four exterior colours to choose from, though: Alfa Rosso, 8C Rosso, yellow and black.

Have fun imagining (yellow’s hot, by the way). But, if you love Alfas, pray that the 500 lucky owners love their 8Cs. Ultimately, style alone is never quite enough. And it’s amazing the difference a hero can make to a manufacturer’s fortunes.