Alfa's 8C Competizione's a rare beauty. We drive one of the first to arrive in the UK 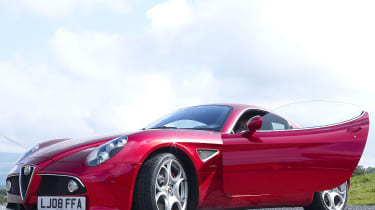 Just like some fabulously good looking reptilian life form emerging from a cool, dark refuge, the Alfa 8C exposes itself to the morning sun as it inches down the transporter’s ramp. Its candy-red metallic paintwork glows and glints in the heat as its broad tyres crunch into the gravel forecourt outside Harry Metcalfe’s place in the Cotwolds, where we’ve convened for the start of the test. For a full minute, everyone just stands and stares. We can ill afford the luxury – a breakneck photoshoot beckons – but taking delivery of arguably the world’s sexiest GT recalibrates time. As the knee-weakening spectacle unfolds, we can only imagine the effect it will have on the 41 UK customers who have paid £111,000 to own the car created specifically to re-instate the Alfa brand in the supercar elite.

The necessary beauty. That’s what Andrea Zagato had said when I interviewed him a few weeks earlier. I’d asked him what it was about Alfas that had made them such a comfortable fit with his own company’s minimalist, almost brutally functional design philosophy over the decades. The necessary beauty. Purity of form expressed with absolute conviction and zero distraction. No decoration, no ornamental manipulation. He was talking about the shape, of course. But now there’s the sound. As the delivery driver hits the starter button, eight cylinders, four camshafts, 32 valves and a labyrinth of meticulously tuned induction and exhaust plumbing crack the air with a blast of combustion that loosens leaves on nearby shrubs and sends Harry’s pet terriers scurrying for cover before settling to a rich, sonorous burble. The two fundamental conditions that grant entry into that most rarefied of automotive sub-groups – the car that seduces before you’ve laid a finger on it – have been met.

But time’s a-ticking. Harry’s off to Italy for a spot of Zonda/Ferrari me-time and we’re heading for the Brecon Beacons with a Brera S in tow. Why the low-rent baggage? Simple. If the limited-edition, flagship 8C represents Alfa at its most quintessential – compressing past, present and future into a singular, iconic entity – there must be a chance, even a slim one, that the best-looking affordable Alfa can tap into some of the re-invigorated, re-focused glory.

Before Prodrive got involved, the exercise would have been a non-starter. Not to put too fine a point on it, the Brera was a gorgeous temptress concealing a terrible secret in the shape of a lousy chassis. So it says something for the level of intrigue the hitherto underachieving Brera generates that I opt to drive it for most of the sporadically traffic-clogged A40 that leads up to the faster, flowing ribbons of tarmac west of Llandovery. The good news is that there is good news. I’ll leave it to John Barker to break it in the following pages, but the very fact that I even feel inclined to strain every one of the Brera’s newly tautened sinews to stay in visual contact with Roger Green in the 8C suggests Prodrive has worked a little magic.

You’d make the effort too, given the view through the windscreen. Argue all you want about where the 8C charts as a static exhibit in the current automotive beauty stakes, but don’t tell me any car has a prettier rear. The exquisite simplicity of the round tail-lights set into the subtly fluted, evocatively retro Kamm tail looks impossibly cool when you’re just circling the car. But on the move it’s mesmerising – not least because it’s part of a full-on audio-visual experience. On any decent straight, the rate at which the size of the 8C’s tail shrinks is perfectly matched by the succession of soaring, staccato-interrupted yowls as its 4.7-litre, 450bhp, Maserati-shared V8 rapidly winds through the six-speed paddle-shift transmission’s stack of ratios. And braking down for a junction, as the red dot starts to reel back into a recognisable shape and Roger flicks back down through the ’box, the overrun sonics sound like a distant, Olympic-standard firework display.

With its steel chassis and self-supporting carbonfibre body, the 8C mixes old and new, not to mention a whole catalogue of parts from Maserati/Ferrari central casting. The engine, for instance, is all but identical to that in the Maserati GranTurismo S and a close relative of that which powers the new Ferrari California. Likewise the transaxle gearbox (the engine is behind the front axle, the ’box just ahead of the rear axle, thus concentrating all the masses within the wheelbase). And since the chassis is essentially a chopped-down version of the GranTurismo’s, it’s no surprise that it shares its basic suspension architecture of double wishbones all round, though bushes, geometry and springs and dampers are specific to the 8C. The brakes run fully floating discs with six-pot calipers at the front and four-pot rears.

We stop for fuel, a sandwich and a car swap. As I slide behind the wheel of the 8C the first thing that hits home is the almost violent contrast between the studied simplicity of the exterior and the chaotic feel-good onslaught of the cabin. It tries perhaps a little too hard to please, providing so many different materials and textures to titilate the senses, the overall effect ultimately decoheres. The brushed aluminium centre console, facia and main switchgear are sublime but the exposed carbonfibre that covers most of the remaining surfaces is too reflective and bleaches out to the point of dazzling the driver in bright sunlight. The leanly-padded carbon bucket seats are very similar to those in the Ferrari Enzo. Not only can they be customized to the driver’s individual shape – they’d need to be in my case, as there’s not nearly enough support for the small of my back – they’re also upholstered in a special ‘breathing’ leather/waxed cotton weave. I mentioned in a previous story that this might just be the sexiest material ever to support a bum and torso but, on further reflection, it looks worryingly like the plastic seat-coverings in the Opel Ascona my dad owned in the ’70s.

No matter, the driving position is relaxed, the deeply hooded main dials as big, bold and clear as they are lovely to look at, the switchgear satisfyingly tactile and intuitive, the steering wheel positively sensual, the detailing a delight.

Press the big red starter button and the V8 erupts into life before settling down to a bassy, guttural tickover. Blip the throttle and the penetratingly savage, raw-edged whoop of revs tells you everything you need to know about the 8C’s preferred driving style. The welter of hardcore charms leave their mark in a series of stark statements: scalpel-sharp throttle response, a predatorial appetite for revs that ramps up in two stages (3000-5000rpm introduces serious shove, 5000-7500rpm intensifies it). The essence of the experience is relentlessly dynamic, building to air-renting, bellowing fury near the red line.

Once the animalistic energy of the V8 has you in its thrall – the combination of punishing push and mechanical purity is deliciously addictive – there are remarkably few dynamic shortcomings to distract you from enjoying it. For the full 8C effect you’ll need to press the button labelled ‘Sport’. This opens a pneumatic valve in the exhaust and ramps up the decibels from ‘chilled’ to ‘chilling’. It also sharpens the throttle response and gives you total responsibility for gearshifts (in the default mode the ’box will execute upshifts when you hit the limiter).

The nose of the 8C feels absolutely nailed to the tarmac. And despite steering that initially feels almost gratuitously weighty, turn-in is unerringly sharp. Better still, though, the follow- through is predictable and controlled, although still accompanied by a surprising degree of roll and slightly compromised body control at high speed. That said, the high levels of grip are well balanced front-to-rear, and the traction control – which acts on the brakes and engine to curb over-exuberance – is subjectively quite subtle and can be switched off if you want to vaporise some rubber with a spot of uncomplicated tail-sliding, though in tighter bends you’ll need to wrap on the opposite lock rapidly and precisely as the tail wastes no time in adopting extreme angles if you give it a bootful.

Yet the 8C is a relatively easy car to click with. As the road snakes and kinks through wooded valleys, I’m struck by how accurate and predictable its manners are. The body structure feels extremely stiff. It’s incisive and honest, rewarding a press-on approach with a fine sense of composure and fluency, refusing to be ruffled. The damping is noticeably firm over mid-bend bumps, but easy to accept given the great front-end bite on turn-in. On the whole, the dynamic repertoire is remarkably complete and polished.

At the end of our 24 hours together, the 8C’s left a deep impression. Reduced to its basic parts it might be just a hardcore, Maserati-engined sports car wrapped in a gorgeous GT body. But it’s fiery and fun and, on the right road, makes you feel like a hero. Alfa couldn’t have asked for anything more, and neither could we.