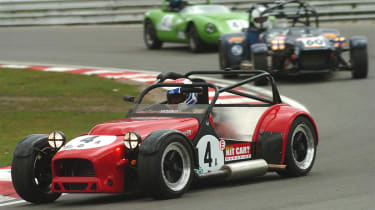 Fancy having a go at the Striker Challenge? It's a new race series hosted by 750 Motor Club. Its core car is the Striker, a Lotus Seven-themed racer developed by Raw, a British sports car manufacturer from Herefordshire. The cars line up on the grid with identical specifications, namely a 160bhp 2-litre Ford Zetec engine mated to a BGH close-ratio five-speed transmission and Yokohama AO48 tyres. A home-build kit will set you back £14,999, while a ready-made Raw Striker costs £17,999. To race in the Striker Challenge, set aside another £2700. That includes an ARD's licence, training and guidance to set up your car plus membership and race entry fees. All in all it's around £300 cheaper than the Caterham academy, and provides 14 races across the UK¹s range of racing circuits. If Raw is a name you aren't familiar with, then it has 20 years of racing heritage. The brand has also revealed another model, the Fulcrum. It is aimed at the track-day market but can be used on the road. No firm details until its big reveal at the 2009 Autosport show in January, but expect 220bhp and a low 600kg kerbweight.