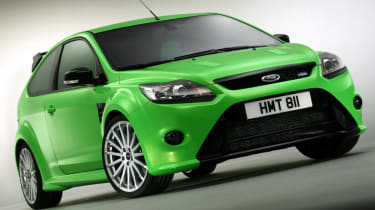 More details of the new Ford Focus RS, due early 2009, have been revealed. Anyone at the Cardiff Millennium Stadium leg of Wales Rally GB will be able to see former double WRC champ Marcus Gronholm take the RS - the fastest European production Ford - for its first public high-speed drive.

The car will gain upgrades springs, dampers and anti-roll bars as well as well as a torque-biasing Quaife limited-slip diff that's apparently much improved over that of the mk1 Focus RS. And while just-shy of 300bhp through the front wheels sounds more than a tad loony, Ford has introduced 'RevoKnuckle' - suspension technology that aims to put all of that power down progressively and rule out torque-steer. The car also gets a wider track and its own version of Ford's ESP system.

Colour options on the RS amount to Ultimate Green, Performance Blue and Frozen White, with matching blue or green interiors coming as standard with the option of decking out the insides in some nice black leather. No prizes for guessing which combination is pictured, the exterior colour seemingly being the hue of choice for a lot of buyers. 'Flying Finn' Gronholm will pilot a blue model, the overall styling of the car reflecting the Focus WRC that he drove Ford to two world manufacturer titles with in 2006 and 2007. It has an outside chance of nabbing the 2008 title, with a 1-2 finish in the Welsh GB getting Ford the crown.

You can see Marcus, the Focus and a whole host of Rallye Sport Fords stretching back over the last 38 years in a parade on December 6 when the last round of the World Rally Championship takes place at Cardiff.

The new Ford Focus RS goes on sale next spring, and despite the impressive stats, it faces a tough job dethroning the Megane R26.R as our favourite hot hatch. An exciting battle awaits, though...