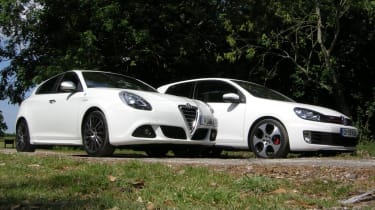 Three hot hatches. Not quite enough information? Well, we wanted to find out what sort of hot hatch the new Alfa Giulietta Cloverleaf is, and getting it together with a couple of likely rivals seemed the best way to go about it. So step forward the £24,250 VW Golf GTI and £21,300 SEAT Leon Cupra to do battle with the £24,495 Italian.

Let’s go for the engines – even if they’re not exactly cutting edge. You see the Giulietta Cloverleaf doesn’t have the Multiair technology that features on lesser engines, but still manages to generate 232bhp from just 1.7 litres. It’s turbocharged of course. So are both the Golf and Leon, which have near-identical 2.0-litre engines and develop 207bhp and 237bhp respectively.

So which is fastest?

The Leon and by a noticeable margin. It feels good for its claimed 6.4sec dash to 60mph, while the Alfa (6.8sec) and Golf (6.9sec) are very closely matched. All are modern hot hatches, which is to say that they have grunty bottom ends (fnar, fnar) and haul through the mid-range with real vigour.

The SEAT is particularly vivid and both it and the Golf sound halfway decent too as they punch happily to limiters just beyond 7000rpm. The trouble for the Alfa is that it’s engine simply isn’t very exciting to use. A good hot hatch, even a turbocharged one, needs a decent top end, but the Cloverleaf nuzzles up against its soft limiter at 6400rpm, having wound itself down for much of the last 1000rpm. It’s not much to listen to either.

The fact we didn’t take a Focus RS or Megane 250 along to meet the Giulietta tells you most of what you need to know. The Cloverleaf is a bit of a softy. Let’s call it an everyday hot hatch – that’s been the secret of the Golf’s success lately: fun to drive, but also practical and socially mature.

The Golf we’ve got here is a good one, in relatively basic trim (three door, cloth seats, manual gearbox) compared to the group test car we featured a few months back. It came across as keener and edgier than that car and compared well against the Leon, too. I think it might have something to do with exactly where you’re positioned in the car, but in the GTI it feels like your sat slightly further back in the car, so you’re more aware of what the back axle is up to. The Leon always feels slightly nose heavy compared to the Golf, and doesn’t have such well weighted steering either.

And what of the Giulietta?

A good hot hatch is characterized by its energy and enthusiasm, a willingness to work hard and have fun. Not the Alfa. Throttle response is too soft, the engine has too much flywheel effect when you lift off and the steering doesn’t give you the weighty confidence of the Golf’s.

Stick it into Dynamic mode (via the ghastly DNA switch) and things improve markedly, but it’s still no fire-cracker. Once settled into a corner it holds a line nicely and the chassis does a reasonable job of communicating available grip, allowing it to carry a good bit of speed. It’s neat and tidy, and the suspension is much better controlled than the MiTo Cloverleaf’s. But there’s no escaping the fact the Golf is more precise, more accurate and faithful in its responses.

Alfa has made a valiant effort at upping interior quality, design and ergonomics, but it’s still no Golf. The chairs are too flat and unsupportive with not enough shape to the backrest, the pedals are low to the floor, so you find yourself pressing them with the underneath of your foot rather than the ball, and the Giulietta is simply not as satisfying to cruise around in as the GTI. At least it’s got the Leon licked for material quality.

On another note I also drove the 167bhp 1.4-litre Multiair which was a better car: delightful turbo hiss and a more natural feel to it. Really rather likeable in fact.

So what’s the verdict?

Golf first, Leon second (but easily the best value), Giulietta third. Pity, but there it is. This is new Alfa: better built, more mainstream and easier to live with, but in chasing the Golf GTI so assiduously, Alfa has lost sight of the bigger picture: it’s forgotten to inject the stuff that makes us love Italian cars unconditionally. So what we’ve ended up with is an Italian car that lacks the flair, vigour and passion of a German car. It’s an Alfa, but not as we know it.