Alfa Romeo's hot hatch Giulietta gets a facelift, and a new powertrain courtesy of the 4C sports car. Review here 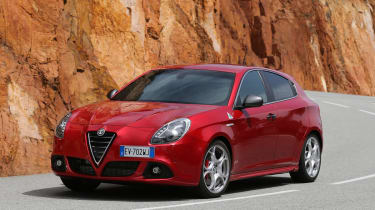 The 2014 refresh for Alfa’s hottest Giulietta, now officially named Quadrifoglio Verde for the UK instead of Green Cloverleaf. It’s been given the engine and dual-clutch paddle-shift gearbox from the 4C sportscar plus a mild kit ‘n’ cosmetics makeover. A price hike, too.

Obviously it’s the 4C powertrain that adds some sparkle to the spec, though in cold figures, the 1742cc four cylinder turbo motor’s 237bhp is only five more than the outgoing model had with its admittedly older and heavier engine. The peak torque figure of 251 lb ft is the same, too, but more generously spread from 2000 and 4100rpm and 80 per cent of that figure available from just 1800rpm. Some will lament the absence of a manual gearbox option but the six-speed DCT puts the Alfa more squarely in contention with German rivals like the VW Golf GTI and SEAT Leon Cupra and allows the inclusion of a launch control which is claimed to be the key to the Giulietta QV’s pretty handy claimed 6.0sec 0-62mph time – that’s nearly a second quicker than the old model. Top speed is quoted as 151mph.

What hasn’t changed is the chassis. The suspension and its settings are the same as before, as is Q2 electric differential that brakes the inside front wheel to rein in understeer when you’re pressing on. Also familiar is Alfa’s three-mode DNA system which configures dynamic parameters between ‘Dynamic’, ‘Normal’ and ‘All Weather’ on request. The four-piston Brembo brakes up front look good and promise sturdy, fade-free stopping. Although the 4C’s ‘1750’ turbo four, with its alloy block, weighs 22kg less than the previous QV’s engine, the DCT weight 20 kg more than that car’s six-speed manual ‘box, so the kerb weight is identical at 1320kg.

Much like the old model, a mixed bag. The engine certainly lifts the tempo and supplies a dose of old school character. Alfa says it’s gone to great lengths to tune the induction to sound less like a muted turbo and more like the classic normally aspirated 1750 twin-cam of yore. It does… a bit. But the note doesn’t have the same depth and texture. Although not nearly as loud and raucous as the 4C’s, it is similarly one-dimensional in character and could become tiresome with prolonged exposure. The power delivery and shift speed feel good enough to hold their own with a Golf GTI Performance Pack’s in a straight fight, but the engine still feels a little ‘boosty’ which can make it hard to modulate power accurately mid-bend. It’s nothing like as ‘on-off’ as it is in the much lighter 4C, though.

Thanks to the ample low-down torque of the 4C engine, the new Guilietta QV’s part-throttle response with the DNA selector set to Normal doesn’t feel nearly as torpid as the old model’s. It’s at least usable. But Alfa’s been wise to move the default to Dynamic which for most drivers most of the time, I’m guessing, is where it will stay – the car just feels that much more alert and crisp.

It’s no magic bullet, though. The Guilietta QV remains resolutely a seven-tenths car. Up to that point it’s a decent enough steer. While lacking the supple finesse of a Golf GTI or Focus ST, its chassis feels nicely tied down and well damped and you can enjoy the potent mid-range urge of the 4C’s engine. Turn in is tidy and the electric diff makes a fair fist of getting the power down without too much tugging at the rim. But set your sights on what, in a more focused hot hatch, would be the reason for owning one – a little on-the-limit playtime – and the Alfa’s initial sense of composure and control dissolves into rather scrappy understeer accompanied by a surprising amount of body lean, and there’s very little you can do with the throttle to modify the cornering attitude. Although ride quality, on the whole, is acceptable, the chassis reacts badly to sharp bumps, sending an unpleasant thud through the body structure. The Brembo brakes are a good match for the straight line performance but, ultimately, the chassis lets the side down.

The Giulietta QV has its charms. Its style, outside and in, is a persuasively curvy Italianate departure from the norm and there’s plenty of classy kit to differentiate it from lesser Giuliettas: 18-inch ‘phone dial’ alloys, a stance-enhancing 10mm ride height drop, unique front and rear bumpers, special headlight surrounds, good-looking (and decently supportive) sports seats and an 8-inch touchscreen for the satnav. The 999-off ‘Launch Editon’, 100 of which will come to the UK, gets further cosmetic signifiers, including matt paint. But then it does cost £30,280 which puts it firmly in Golf R territory and, on the road, that’s fight it simply cannot win. The regular QV is a slightly less eye-watering £28,120 but again it’s beaten hands down, if you’re at all interested in driving, by the SEAT Leon Cupra 280 which costs only £400 more.

The headline power and torque stats may not be that much different to before but the new all-aluminium engine’s direct injection is significantly more efficient. Alfa claims 40.3mpg (up from 37.2mpg), while CO2 output is down from 177g/km to 162g/km.