It's stylish, packs 232bhp and wears four-leaf clovers on its wings. But is it good to drive? 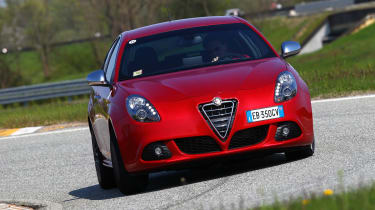 Alfa Romeo wants the new Giulietta to put the company at the top of the class for looks, sophistication and driving fun. And top of the Giulietta tree is the Quadrifoglio Verde, which combines the Mito-grows-up styling and typically Alfa interior (all cowled dials, lateral pleating and horizontally sweeping dashboard) with a promising-sounding 232bhp.

This power comes from a modest 1.8 litres with the help of direct injection, a turbocharger and valve timing of such extreme variability that the exhaust pulses can scavenge the combustion chambers at low engine speeds and greatly improve the filling of the cylinders with fresh air. Result? Minimal turbo lag and terrific low-end torque.

Combined with the new suspension that’s radically different from the outgoing 147’s (it reverts to front struts and has a new multi-link rear, all with much use of aluminium), this engine should make for a very amusing Alfa. The new power steering rack should help, too, with its motor mounted on the rack instead of on the column in an effort to reduce the friction and inertia in the system. The criticisms levelled at the Mito’s car/driver interface have been taken to heart, it seems.

Out, then, onto Alfa Romeo’s multi-bended, multi-textured test track at Balocco. Straight away the engine feels smooth, with a deep, crisp note to go with the Alfa badge, and as promised there’s a lot of low-end energy. The steering feels precise, with no Mito-esque stodge and rubberiness and a natural weight. Set to the ‘DNA’ system’s Normal mode, the throttle response is soft, but otherwise all is civilised, with a smooth, quiet but underlyingly taut ride on the optional 18in wheels.

Into some fast sweeps and you can feel the ‘EQ2’ electronic differential system doing its understeer-reducing job, but it’s clear that the natural balance is a touch inert. Backing off the power brings on some intervention from VDC (Alfa’s ESP), with a little electronic tug at the steering wheel to help me decide which way I ought to steer in case the VDC’s efforts are insufficient. In reality it feels just like normal self-centring.

It’s all proving a bit dull, not helped by spongy brakes and a rubbery six-speed gearchange. So I switch to Dynamic. This firms the brakes thanks to ‘pre-fill’ (priming of the calipers as soon as I throttle off) and greatly sharpens the initial throttle response. The steering is weightier, too, but in a good way because assistance is reduced instead of resistance being added, as is too often the electric-system style.

Now there’s a touch of tugging at the steering as I power out of a corner, enough to hint at the ample torque without corrupting the line, but that improved throttle sharpness isn’t maintained all the way through the pedal travel. That and the limiting of engine revs to 6250rpm mean that the initial promise of performance fades.

The VDC is now sufficiently loosened to allow brief chirps of wheelspin and the EQ2 is countering understeer more enthusiastically. But it’s not really enough: the tail is still too tied-down to allow proper entertainment, and it thwarts attempts to point it into corners by modulating the throttle, so the QV still feels too inert for a car with Italian genes. (Worryingly, the Alfa chassis engineers viewed the Audi A3 as an exemplar of the ride and handling art and considered the Ford Focus poor.)

The QV, then, is a brisk and competent car but it doesn’t involve and reward as an Alfa should. It’s more GT than hot hatchback, which to us is an opportunity missed. You’ll have more fun in the 168bhp MultiAir model, whose lighter nose makes its handling a whole lot more interactive and keener to point into corners. That’s the pick of the range.