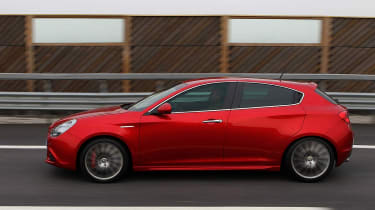 Alfa has combined its twin-clutch TCT transmission – previously only offered on the Mito – with the Giulietta. It’s available with both petrol and diesel engines and set to carry a £1350 supplement in the UK. We drove it with the 168bhp 1.4-litre turbocharged ‘Multiair’ engine.

Alfa is justifiably proud to have led the development of the transmission, which is built in-house at its Verrone factory. Although its set to expand throughout the Fiat Group in future, the TCT is being used exclusively by Alfa for now.

The ‘box is a dry clutch system – which is more economical than oil-powered ‘wet clutch’ boxes – with electro-hydraulic operation and, as with rival systems, one clutch engaging odd-numbered gears and one engaging evens. We’re told that the entire system weighs 81kg, little more than the standard Giulietta’s six-speed manual box. Alfa claims that the TCT both improves fuel economy – dropping CO2 emissions from 135g/km to 121g/km compared with the manual gearbox – and also trims acceleration times, removing 0.1-second from the 7.8-second 0-62mph time that the Multiair manages with a stick. Win: win, surely?

In a word: painless. Alfa makes great claims of the gearbox’s different behaviour as governed by the same ‘DNA’ controller that switches various other dynamic settings, but in truth the automatic mode feels pretty much the same whichever setting you’re in – kickdowns are delivered earlier in ‘Dynamic’ and gears are held onto slightly longer, but in normal use it’s effectively invisible. Considering that Alfa has no plans to offer the Giulietta with a conventional torque converter auto it’s an effective substitute, with good low-speed refinement and rapid, near-invisible shifts between ratios.

Pushing the gear selector left into its manual over-ride channel is likely to bring a bit more criticism. Alfa sticks with the correct racer-derived approach of pulling back for a higher gear and pushing forwards for a lower one – which is good – but there’s a small but noticeable pause between making requests to change ratio and feeling the next one arrive. We also had a spin in a 2-litre diesel version which seemed to be a bit quicker. On the plus side, the system copes well with requests for a series of multiple downchanges that can often confuse rival systems, and the weighting of both the gear selector and the paddles behind the steering wheel are spot-on.

The rest of the driving experience remains as before – the Giulietta isn’t the sharpest steer in the segment, with the tight corners of the Balocco test track where we drove it emphasising its aversion to slow apexes – but it’s still a very likeable car, especially with the punchy Multiair engine.

At £21,855 in ‘Lusso’ trim the TCT transmission commands a £1350 supplement over the manual car – which compares favourably to the £23,255 that Volkswagen will charge you for a DSG-equipped five door Golf GT. The Giulietta undercuts the VW’s 139g/km CO2 rating by a fair margin, too.

Alfa says it can make up to 150,000 TCT transmissions a year, and we can expect to see it throughout the corporate range, including the forthcoming Giulia and SUV.