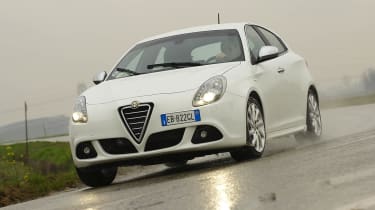 What is it?Alfa Romeo’s new 1-series, A3 and Golf rival, the Giulietta. It’s a big step forward from the Alfa 147 it effectively replaces, and promises to properly take the fight to its rivals, rather than simply being a stylish alternative. Here we’ve driven it in 168bhp 1.4 Multiair petrol form. Technical highlightsIt sits on a new platform, unexcitingly named ‘Compact’, that bears no relation to the Fiat Bravo, as rumoured during the car’s development. Instead the suspension boasts MacPherson struts up front and a Multi-link setup at the rear, and there’s an abundance of weight-focused materials – including high-strength steel – to make the Giulietta’s 1365kg kerbweight competitive. Alfa’s Q2 diff comes as standard across the range, being made active by the Dynamic mode of the car’s DNA system. What’s it like to drive?Very good; its ride is supple and it handles with similar panache to a VW Golf, itself a benchmark in the hatchback class. And with the gutsy petrol-powered Multiair engine up front, you have plenty of power and torque available from low revs.  That DNA system is vastly improved, too; Normal mode is still a bit flat, and if you’re a keen driver you’ll need to flick into Dynamic each time you get going. As well as the activated diff, the car’s torque is upped 14lb ft and the steering is sharpened (while a natty pair of performance graphs appear on the sat nav screen); the result is a front end that’s easy to point into corners, and which pulls you out of them with ease thanks to Q2 and a really responsive throttle. But - and it’s a big but for an Alfa Romeo - the sparkle’s missing. Previous generation Alfas have been flawed but undeniably characterful to drive. The Giulietta turns the brand’s personality on its head, dishing up a very impressive and competent driving experience that doesn’t really have you gagging to go back. How does it compare?To a Golf, very well indeed. It feels as well built nowadays and like we’ve said, driving the pair in close succession draws up surprising parallels. Stack the Giulietta up against any of its countless other foes – Megane, Focus, A3, 308 etc – and it’ll more than likely win you over. With prices set to start at around £17,000 (£19K with this engine), it’s very competitive in class. Anything else I need to know?You’ve a choice of Standard or Sport setups - the latter is best. Standard gets you marginally softer suspension and 16in wheels, and while it’s more compliant than the stiffer, 17in wheeled Sport, the differences are small and without the bigger wheels, darkened lights, side skirts and suchlike that Sport brings, the Giulietta’s a frumpy looking car. Oh, and we've driven the range-topping 232bhp Giulietta Cloverleaf here.