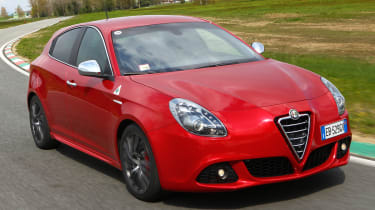 What is it? Here is the top model in the new Alfa Giulietta range, the 232bhp Quadrofoglio Verde or Green Cloverleaf. It outpowers a Golf GTI, doesn't quite match a Mégane 250 and has an engine smaller than both. If you were hoping for a replacement for the the old 3.2-litre, V6-engined 147 GTA, you'll be disappointed – but downsizing is the way of the world now.  Technical highlights The engine is the 1.8-litre, direct-injection turbo unit already seen in the 159 and Brera, which uses extremely variable valve timing to scavenge combustion chambers for great low-speed torque and minimal turbo lag. The new 'Compact' platform shares only the floor sections with the 147, and the new suspension uses much aluminium. The platform can take four-wheel drive so expect a future 'Compact'-based SUV. What’s it like to drive? Stung by criticism of the smaller Mito's stodgy, rubbery electric power steering, the Giulietta has a new system with the motor on the rack instead of the column - less friction; less inertia. The result is a much more natural steering feel and a welcome transparency. The standard-fit Q2 system functions as an electronic differential to brake the inside front wheel when understeer threatens, and it works well. VDC (Alfa's ESP) intervenes readily in the DNA system's Normal mode, but not too annoyingly. The throttle response is pretty dull, though. Switch to Dynamic and it's a much better Giulietta. The throttle sharpens so you can enjoy the hefty low-end torque better and hear that deep, crisp engine note. The steering weight rises but in a natural way, not by artificially increasing resistance. And the brakes change from spongy to quite sharp, thanks to 'pre-fill'. Dynamic also loosens the tail a little before VDC intervenes, but this is still not a car to be pointed keenly into a bend on a trailing throttle and caught with a dab of power. It's too tied-down and inert for that, which is a shame for an Alfa Romeo. This is more a GT than a proper hot hatchback, an impression heightened by the engine's inability to pass 6250rpm, and a trick has been missed. It does ride well, though, even on its shallow-sidewall 225/40 R18 tyres.  How does it compare? The Giulietta's chassis engineers rate the Audi A3 highly and think a Ford Focus poor, which tells you a lot. The QV should be a rival for that Golf GTI and Mégane 250 but it lacks their dynamic sparkle. Instead it's good A3 or BMW 1-series alternative, which is what Alfa Romeo wanted. As far as the mainland European market is concerned, Alfa is probably right. Anything else I need to know? Expect a price around £22,000, but you might be better off saving a little and going for the 168bhp 1.4 MultiAir, driven here. Why? Because it's lighter in the nose, keener to turn, more playful on the throttle and ultimately more fun.