The stars and highlights of Italy's Bologna winter Motor Show 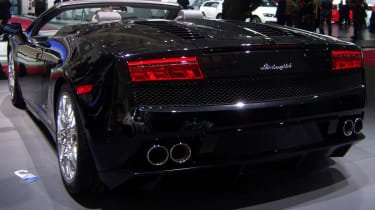 While the Bologna Motor Show normally ranks as one of the motoring calendar's smaller shows, it still has the power to surprise. Nobody saw the VW Scirocco Studie R coming, a major hint at a future hot coupe to take the Germans' fight to the Focus RS.

The Ferrari Scuderia Spider got its major debut on home turf, while the Gallardo LP560-4 has also dropped its roof in successful fashion, with a smart black car (pictured) on display alongside the ever-popular Estoque.

View evo.co.uk's picks of the show by clicking the links below, and if anything has stirred your interest then reveal all on the forum.