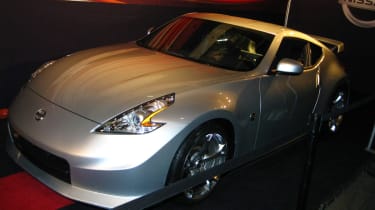 The Nismo version is perhaps the more surprising news, with a seemingly official place in the Nissan line up as opposed to aftermarket additions to the stock 370Z. This includes a fully integrated Nismo bodykit (check out the sizeable rear wing) and a power hike to 345bhp. There’s tuned, four-wheel independent suspension, uprated brakes and a viscous limited-slip diff as well as Nismo 19in lightweight forged alloys.

It’s a fantastic looking thing, with a much more muscular look than the standard Z-car and a rear three quarters reminiscent of a Porsche GT2. Sadly, it appears sales will be US (and presumably Japan) only, with no UK cars confirmed.

A car we will get on these shores, and later in the year, is the 370Z Roadster. While it isn’t quite as eye-catching as the Nismo, it is a neat drop top that will hopefully retain its coupe sibling’s sharp drive, just like the 350Z roadster managed. It retains the 3.7-litre V6 from the hard top, with 327bhp and 269lb ft on tap. It comes with the choice of six-speed manual or seven-speed auto transmissions, and in fitting with its sporting pretensions the roof is fabric. Prices should be around £1500 more than the coupe, so set aside £28.5K if you fancy one.

The 370Z Roadster and the Nismo 370Z both got their first public viewing at a swanky New York bar, lined up alongside a 370Z Coupe. Reaction from the man in the street seemed to be good, with many instantly recognising the 370Z as the great grandchild of 240Zs they owned years ago. They were positive reactions that bode well for the newly launched 370Z.