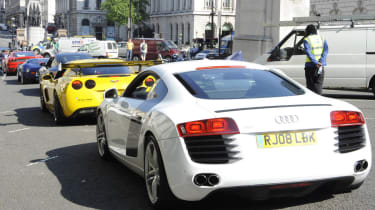 On Friday May 1 evo took part in the Silverstone Supercar Tour, which started at the RAC Club in London's Pall Mall at 10am and ended with several laps of the Grand Prix circuit at Silverstone. Scroll down for a few pictures from the event.

50 supercars took part in the convoy (which was organised in order to deliver the wonderful Tourist Trophy to Silverstone for this Sunday's FIA GT Championship race) including cars as wide ranging as a mad 550bhp Detomaso Pantera, a brand new Bentley Brooklands, 17 Ferraris in every shape and size available and evo's long term Pagani Zonda C12S.

The high speed convoy was escorted out of London by a team of eight expert Police outriders who stopped all traffic and gave us free reign to pass through red lights as required. Even the A40 Westway was halted to let us drive through unheeded.

It was a real blast for all those lucky enough to be taking part and also seemed to go down well with all the spectators lining the route through Central London. Our thanks go out to the Police for allowing such an event to take place in these restrictive times. There be more details of the tour in next months issue of evo. View the evo supercar tour video