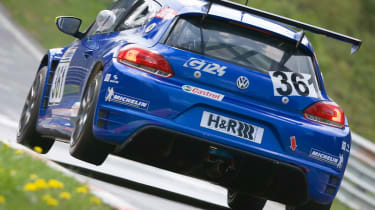 Volkswagen’s testing of its Scirocco GT24 racers is going from strength to strength. It is entering five cars into the Nurburgring 24 hours later this month, and raced two of them at the Ring this week in the third round of the BFGoodrich Endurance Championship.

One of the 311bhp petrol powered cars (pictured, blue) was piloted by former rally ace Carlos Sainz alongside teammates Franck Mailleux and Vanina Ickx, and claimed victory in the 2-litre turbocharged class, coming 25th overall. It will influence the upcoming road-going performance Scirocco that’s set to take the fight to the Ford Focus RS.

There will be three petrol and two gas GT24 cars running at the Ring 24 hours on May 23-24, with our Motoring Ed John Barker racing one of the alternative-fuel Sciroccos. Keep a track of his progress on evo.co.uk, and you can read about his preparations so far in the current issue of evo, on sale now.