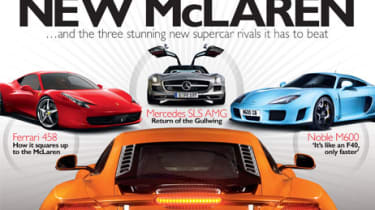 NewsThe number 3 and the letters S, G, R and T (not necessarily in that order) have been placed on the rump of a 911 once more. Plus, on p26 we’ve been to Utah for the Bonneville Speed Week

LettersQuite a reaction to our 100 Greatest Drivers’ Cars feature, including one missive from a Paul Flemke. Wonder what he drives…

New supercarsFirst we’ve got all the details and an exclusive photo-shoot on the new McLaren MP4-12C. Then, on page 66, we compare the Mac with its biggest rival, the new Ferrari 458 Italia, before having a chat with the most famous man ever to grace a leather bomber jacket (Ron Dennis) on page 70. AMG has been hard at work on some snazzy doors too, so on page 74 John Simister takes us through the modern-day Gullwing, the Mercedes SLS. Finally, on page 78, we have a drive in the car that could top them all on both performance and price – the brand new Noble M600. John Barker has been going sideways in it

Radical at the NürburgringRadical set the Nürburgring lap record for production cars a couple of years ago, but some spoilsports claimed the SR8 wasn’t a proper road car. Roger Green sets out to prove a point

Mugen CivicFirst there was the standard Civic Type-R and it wasn’t very good. Then there was the Championship White, which was better. Now we have the Mugen and it’s excellent

SubscriptionsIf you’re a famous person and you read evo, why don’t you let us know? Come on, don’t be shy now

Top ten BTCC crashesSome people imbued with Schadenfreude claim they watch motorsport chiefly for the crashes. We assume they have season passes to the BTCC

Long-term testsWe say goodbye to two V8s this month – the Lexus IS-F and our Jaguar SV8 – and welcome another, a Cayenne, aboard

ShowroomIf the Ferrari 360 in our buying guide doesn’t get your wallet itching, the CLK Black Series or mk1 Focus RS will

The KnowledgeWant to know how rapid a 911 Turbo is around the West Circuit? Very. Take a look at page 148

Ask the ExpertsDo different exhaust shapes make a difference? We have the answer

Birth of an Icon: Porsche 924The front-engined love child of Porsche and Volkswagen built in an old motorcycle factory