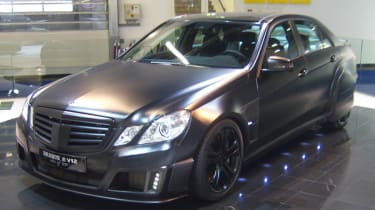 Brabus didn’t let its home fans down at the Frankfurt motor show. The specialist Mercedes-Benz tuner had a rather packed stand, with an abundance of metal ranging from modified Smarts to the crackers new E V12.

The latter (main pic) attracted a fair amount of attention, with mad looks to go with its insane powerplant. Your eyes will have likely crept straight to the back of the E, where the rear wheels are adorned with carbonfibre ‘aero spats’ to reduce drag and improve aerodynamics. They’re teamed up with a slightly more subtle rear wing, made out of the same material.

You’ll be grateful for it all if you happen to be going flat out in an E V12, though – its 6.3-litre twin-turbo engine boasts 800bhp and catapults the barking mad E-class to 231mph, via an utterly staggering 3.2sec 0-62mph time.

Just ten will be made, priced just shy of £500K (at current exchange rates). And if you want to tone it down a tad, Brabus will remove the spats and wing and take out 50bhp for you. A 219mph top speed will have to suffice, though…

Also on the Brabus stand was a matt grey Mercedes SLR, the Bullit and Rocket sports saloons as well as the firm’s 196mph E-class. Oh, and a 4-litre version of the Mercedes Viano minibus. Obviously.