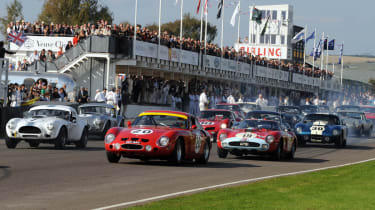 Two anniversaries are to be celebrated at this year’s Goodwood Revival with takes place this weekend (September 18 to 20). It’s half a century since the first Tourist Trophy – arguably the venue’s most famous event – was run. It’s also five decades since the Mini hit the road. Both milestones will be marked at the Revival.

Two one-hour fixtures will recapture the magic of the Tourist Trophy. The Lavant Cup, for cars originally raced between 1958 and 1959, will recreate the deciding round of the 1959 World Sports Car Championship. Aston Martin, Ferrari and Porsche all had a chance at victory in Septemer 50 years ago. DBR1s, Testa Rossas and RSKs will fight it out with Jaguar D-Types, Lister-Jaguars and Elvas. Aston Martin claimed victory in ’59 - will history repeat itself at the Revival?

The Royal Automobile Club Tourist Trophy Celebration brings £80m worth of historic race cars from 1960 to 1964 into battle for honours. Who couldn’t relish the sight of Jaguar E-Type Lightweights, Aston Martin DB4GT Zagato and Ferraris including a 250 GT SWB, GTO and 330LMB in wheel-to-wheel, oversteery combat? As with the Lavant Cup, there will be two drivers per car, headliners including Derek Bell, Jochen Mass, Emanuele Pirro, Jackie Oliver and Adrian Newey.

For the St Mary’s Trophy, a swarm of 30 pre 1966 Minis will form an exclusive grid of the Issigonis desgined classic. While most will be 1275cc Coopers, a lone Wolseley Hornet will be in the mix. Expect to see Mini experts including Rauno Aaltonen, Alec Poole and Warwick Banks battling with such luminaries as Derek Bell, Jackie Oliver, Bobby Rahal and Rowan Atkinson.

The whole three-day weekend will be packed with races for cars up to 1966, while the earliest cars will compete in the Brooklands Trophy for racers built before 1939.

The Goodwood circuit looks now as it did during its late 1940s to mid 1960s heyday, and during the Revival weekend only vehicles made during that time are allowed within the circuit’s boundaries. Combined with the period dress worn by many visitors and the hand harvesting of corn on the infield, the Revival uniquely captures the atmosphere of motorsport’s past. You can book tickets online at www.goodwood.co.uk or by calling 01243 755055.