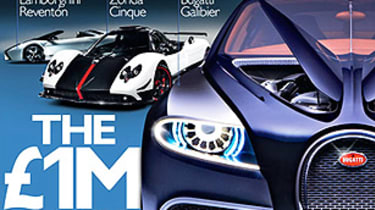 LettersAlways thought the Peugeot 309 GTI was an underrated car? Well not any more it’s not

Panamera group testWhat is the Porsche Panamera? Fish? Fowl? Foul? None of the above? We pitch it against the Jaguar XFR and the Maserati Quattroporte to find out. And look out for the new Jag XJ’s cameo appearance

Cloverleaf Alfa Ugo Sivocci first had a quadrifoglio verde painted on an Alfa Romeo for the 1923 Targa Florio. He won. Now the badge is back and it’s on a Mito. A very impressive Mito…

Bentley SupersportsThe fellows at Crewe have been feeding the Conti GT a diet of carbonfibre and sending it out on early morning runs for the last few months. We’ve driven the result

Mega Mini testJust about everyone has a fond memory of driving a Mini, but which one from the last 50 years is the most rewarding to drive? Ollie Marriage takes six of the best and heads for the hillsJaguar E-type SpeedsterCreated by Eagle, this is undoubtedly the most beautiful car in the issue. Henry Catchpole has a very jolly day out with it

Mazda 3 MPS v Focus ST MountuneBoth turbocharged, both front-drive, both hatchbacks. One’s much better than the other…

Lambo road and raceOne day, not so long ago, our Rog drove a Lamborghini LP550-2 to a race track. Then he went racing in another Lamborghini with Andy Wallace. It was a good day

Long-term testsWe would’ve seen our R26.R’s titanium exhaust disappearing from the car park for the last time this month if the Range Rover hadn’t been following it out

Project VeyrogAfter the full intent of our TT was revealed last month, Bugatti seriously considered delaying its reveal of the Galibier

ShowroomFancy purchasing a BMW Z4 M Coupe? You should read our buying guide and then have a look through our dealer ads…

Birth of an icon: Bentley TurboThe car that helped Bentley step out of Rolls-Royce’s shadow