evo's Car of the Decade contest kicks off with the year 2000. Vote on your favourite performance car 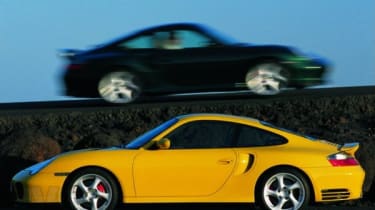 What’s the best car of the last ten years? It’s a particularly apt question as the first decade of the 21st century draws to a close. So we’re asking it, or more specifically, asking YOU it. Every weekday we’re looking at an evo Car of the Year contest from the Noughties, detailing the top five and throwing the vote at our lovely readers to pick the winner. The ultimate ten will then fight it out in the New Year for evo Car of the Decade. Click for winners so far and eCotd roundup We kick off (predictably) with 2000. Peruse the performance cars below and get voting this way… (poll at bottom of page) Porsche 996 Turbo (click the car names for content)The winner of eCoty 2000 (and the third evo Car of the Year on the trot from Stuttgart) and a blooming impressive one, though its all-weather ability benefited hugely from the sodden Wales Coty was held in. Still, it proved just how capable a supercar it is in the real world. Richard Meaden – ‘It’s magnificent in all weathers, brutally fast but creamily refined, tactile enough for you to get the best from it, but not so manically touchy-feely that it wears you out after 30 minutes of hard driving.’ Lamborghini Diablo 6.0A very tight Coty saw the mad yellow Lambo just miss out on first place, and it left Wales as many people’s real favourite, offering the full-strength supercar experience – as well as proper drama – but with an accessible, forgiving character. Evo’s associate road tester John Hayman drove the car from London to Wales and emerged totally enamoured – ‘Everything about this car is an event, from the shape, to every sound it emits, to every tactile experience you encounter. It oozes evoness from every pore.’ Subaru Impreza P1One of the most extreme of the officially imported Imprezas, this Prodrive-fettled rally replica came close to giving something five times as expensive – the Lambo – a bloody nose. We’ll let Meaden explain again – ‘The damping, road-holding, adjustability – both on the power and under braking – are breathtaking. It could be an uninvolving arcade game of a car, but in fact when you grab the P1 by the scruff, you feel terrifically involved.’ Lotus 340RSo good, evo owns one. For it to be the most fun car at eCoty 2000 is impressive – that it continues to amaze us, coming close to being our top drivers’ car of all time and topping our Lotus celebration group test last winter, is nothing short of brilliant. It might look like an alien beach buggy for the road, but it’s in with a very real shout of being evo’s Car of the Decade. Vauxhall VX220Like the 340R, the VX220 is related to the Lotus Elise. Unlike the 340R, it has proper doors and wears the same badge as a Vectra or Corsa, with an approachable pricetag to match. David Vivian said this – 'A moral victor if ever there was one. Better than the Lotus Exige in the wet, triumphant styling, fantastic steering-grip-poise, huge grin factor, safe and exciting at the same time. And it’s a £23K Vauxhall. Belter.’ That you can pick one up for a quarter of that now may swing the vote towards the VX... So, they’re your contenders for 2000. Click here to vote for your favourite and use the Forum to air your opinions or tell us about cars that should be here. And don’t forget to come back on Monday for the best of 2001… Follow evo on Twitter or join our Facebook page