Ultimate chest wig? The outrageous Diablo is not for the shy introvert... 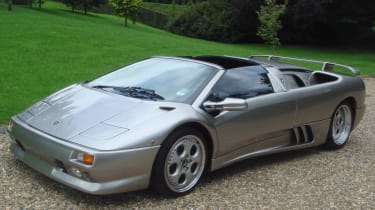 It’s been a while since I’ve seen a Diablo, let alone driven one, and its outrageous lines and size come as quite a shock as I roll up at Marlow Cars’ premises, just outside Reading. If it’s jaw-slackening drama you’re after it’d be hard to find anything more effective for £80K, especially as this particular Diablo has the added rarity of being one of just 200 roofless versions.

Registered in 1999, this was one of the later Diablos, and it has been used sparingly – just 46,000km have passed under the cartoonish wheels over the last decade. That doesn’t mean it has ever wanted for anything, though. A quick rifle through the receipts shows that the third owner spent a fearsome £8800 on a major service (including over £2K in labour charges) last November. And that was after splashing out over four grand on a cosmetic makeover the year before! The bodywork and wheels are immaculate, though, and from the outside the car looks as good as new.

Inside, the leather shows some age, as do the ergonomics. You sit with your feet slightly skewed to the left thanks to the intruding front wheel, but it’s not uncomfortable and you forget about it as soon as you fire up the massive 5.7-litre V12.  Out on the road the gearbox and clutch feel healthy, and it takes just one clear stretch of road to confirm the fitness of the 492 horses bolted to your back. With the roof panel stowed above the engine cover you get a little scuttle shudder over big bumps, but not enough to distract you from the glorious noise that fills the cabin.

If you’ve £80K to spend and you want every journey to become an event then this would do very nicely.

• Exterior The respray and tidy-up that it received two years ago has resulted in a concours finish• Interior The leather has worn well but, unlike the exterior, it does show its age• Mechanicals Everything feels spot-on and the paperwork proves that no expense has been spared• Should I buy it? Not if you’re a shrinking violet, otherwise you’d be hard pushed to find one in better shape  • FOR: Its looks, its engine, its sheer madness• AGAINST: Impossible to drive one anonymously